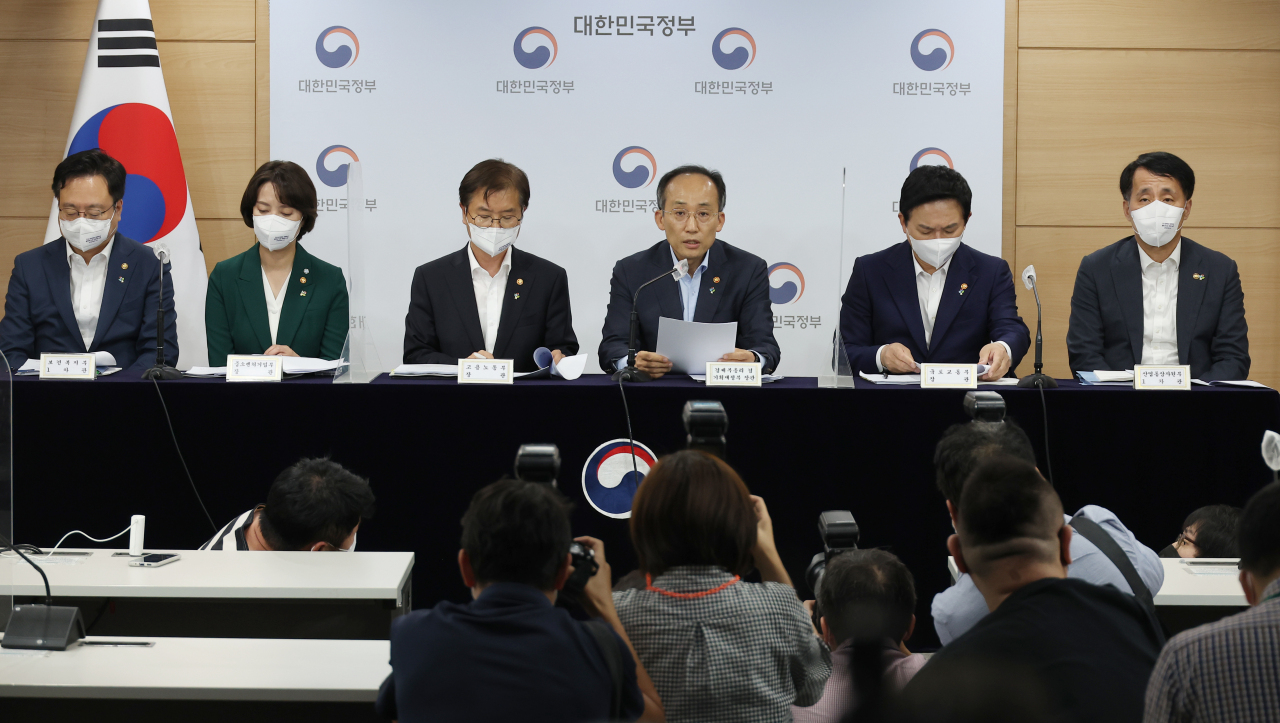 Yoon will carry out regulations, tax reform to pursue a market economy

By admin On Jun 16, 2022
Share
SEJONG — The Yoon Suk-yeol administration on Thursday unveiled a five-year plan aimed at building a business-friendly and market-oriented economy by implementing intensive deregulation measures and easing the tax burden on businesses.

In a major shift from the previous administration’s Liberal agenda of an income-driven economy, the new government has also pledged to minimize state intervention in the market. In addition, the plan includes a series of reforms, such as the restructuring of the national pension system.

Announcing the five-year plan, Deputy Prime Minister and Finance Minister Choo Kyung-ho and other ministers said in a joint statement that the core of the Yoon administration’s economic policy is deregulation.

“(The administration) will relax a variety of regulations, which have restricted the freedom and creativity of the private sector,” the statement read.

The government will refrain from excessive intervention in the market, under which the economy would shift to one that emphasizes “private sector, business and market-based activity,” the statement said. .

To encourage business investment and job creation, the administration plans to reduce the corporate tax ceiling to 22% of income, from 25% currently. It will also revise the tax system to resolve double taxation of businesses at home and abroad.

Over the next five years, structural reforms will take place in five sectors – tax affairs and pensions, labour, education, finance and services, according to the plan.

As for education reform, the Ministry of Education plans to grant more autonomy to universities and colleges in order to promote human resources in high-tech industries.

Regarding market reform, the Ministry of Finance, in consultation with the Financial Services Commission, will abolish the tax on capital gains from stock transactions which was to be applied to all investors who earn more than 20 million won ($15,500) through stock trading, starting next year.

Marking a reversal from the previous government’s tax regime, the new plan will impose a capital gains tax on an individual who owns shares worth 10 billion won or more.

In a separate announcement, the Ministry of Finance revised its growth target for the economy in 2022 to 2.6%, from 3.1% previously.

It also significantly raised its inflation forecast this year from 2.2% to 4.7%.

The ministry said the bleak outlook is based on a variety of economic issues at home and abroad. He also warned of the possibility of the nation facing another variant of COVID-19. Nevertheless, private consumption growth is expected to reach 3.7% this year, he added.

Sorry, but Chinese scientists have not found an extraterrestrial radio signal