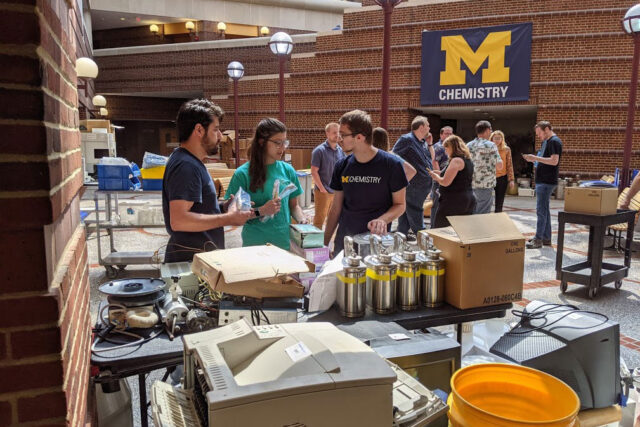 The University of Michigan was one of the top universities in the 2022 Campus Race to Zero Waste competition.

UM ranked first in the Large Campus Division for Zero Waste, which is for campuses with advanced waste reduction programs, zero waste plans and policies in place, and the ability to weigh sources of waste. waste and materials collected for reuse.

The university tracked all sources of waste generated in three campus buildings over an eight-week period, aiming for the highest diversion rate by recycling, composting and reusing items to reduce the amount sent to landfill.

The UM buildings competing in the zero waste category were:

“Staff and students in these three buildings are active participants in waste reduction and zero waste efforts year-round and are great partners in sustainability,” said Alison Richardson, Program Manager. to the Office of Campus Sustainability. “Everyone’s efforts were essential for UM to win this award.”

At the Ann Arbor campus, UM collected more than 748,400 pounds of recyclables and 349,600 pounds of compost during the eight weeks of competition in February and March. Diverting this waste from landfill avoided 1,225 metric tons of greenhouse gas emissions, which is equivalent to taking 260 cars off the road for a year.

Along with the nationwide Campus Race to Zero Waste competition, OCS is hosting a challenge among participating facilities on the UM campus.

In the UM edition, each facility competed against its composting and recycling performance in 2021 in three categories: greatest rate of waste reduction, greatest diversion of waste from landfills to recycling and composting, and most improved diversion rate.

This year’s winners were:

Over 200 US and Canadian campuses participated in the Campus Race to Zero Waste. They recycled, composted and donated 9 million pounds of trash.

UM has built a solid foundation for zero waste success with initiatives such as:

Recently unveiled action measures include expanded plans for geothermal heating and cooling systems, $10 million in funding for additional LED lighting in approximately 100 buildings across three campuses, and $300 million in “green bonds.” for projects that align with UM’s carbon neutral goals.

The Campus Race to Zero Waste and related efforts support the Ann Arbor campus’ goal of reducing the total amount of waste sent to landfills by 40 percent. The goal is part of UM’s 2025 Ann Arbor Campus Sustainability Goals, established in 2011.