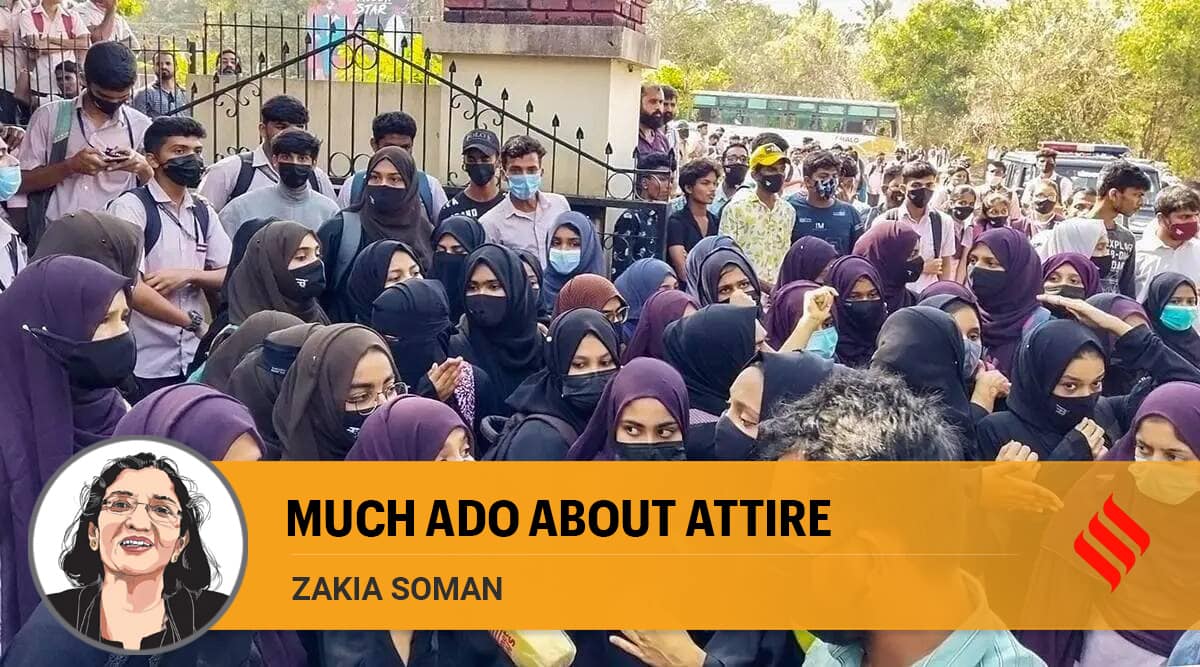 The Karnataka High Court’s verdict on schoolgirls wearing the hijab has barely settled the controversy that appears to have become the latest flashpoint in our religiously polarized nation. Girls in hijabs were refused entry to classrooms on the grounds that by wearing the head covering they had violated the uniform prescribed by their institution. The issue could have been easily resolved through a dialogue between the college authorities and the parents. Instead, it has become politicized with different religious and political outfits jumping into the fray with their radical and antagonistic stances. It was as if the right to education and the right to religious freedom were at loggerheads. Unfortunately, the HC did not correct this misplaced notion. Nor did he address the stale atmosphere in some of the state’s educational institutions, as highlighted by shocking videos of boys wearing saffron headscarves heckling a girl in a hijab.

Educational institutions have the right to establish their own rules, but these cannot violate the fundamental rights granted by the Constitution. Also, uniforms cannot be more important than education itself. Courts can do little to help when citizens fail to mutually resolve social problems in the face of institutional rigidity. When justice dies in hearts, courts and verdicts become meaningless.

Girls in hijab advocated for the protection of their rights to religious freedom, education and freedom of choice. The Karnataka government has argued that reasonable restrictions, in an effort to maintain a secular outlook, are enforceable under what it called the doctrine of institutional discipline.

A BJP government that argues for maintaining secularism is pretty wealthy. India is not France where secularism is an avowed ideal translated into practice. Hindutva leaders publicly denounce secularism as a Western notion and openly embrace religiosity in public life. We live in an age of MPs and ministers dressed in saffron. Parliament is certainly as much a public space as a classroom. And, a chief ministerial office demands as much adherence to a secular dress code as a classroom. Singling out girls wearing the hijab is downright discriminatory and a double standard.

It is now well known that the hijab is not one of the essential practices of Islam. Nor is it one of its five pillars. Several Islamic scholars, including Fatema Mernissi, have researched the origins of the veil in Islam to conclude that not only is it not compulsory but has nothing to do with women. A harmless Arabic word used in religious text to describe a wall, barrier, obstacle, partition has been twisted to impose the veil on Muslim women in male-dominated societies over the centuries.

The hijab only recently arrived in the Indian subcontinent. Our grandmothers and our mothers did not wear the veil. My grandmother, a headmistress, wore the Gujarati saree to school. My mother’s generation adopted the more fashionable Bengali saree and salwar-kurta. Growing up, we always saw women in our mohallas modestly dressed in sarees or salwar-kurtas. There was an occasional family or two in the mohalla whose wives observed strict purdah. The entire mohalla respected their preference and made adjustments to spare them any unforeseen embarrassment. All women covered their heads whenever an occasion called for it, such as during a religious ritual or when someone died. Many older women regularly covered their heads with dupattas or sari pallus. They didn’t suffer from hassles like making sure no strands of their hair were showing.

The argument that the hijab is a woman’s choice could lead to a slippery slope. Nevertheless, I believe that his choice must be respected. The lack of social reform in Muslim societies in South Asia has caused patriarchy to masquerade as a religion. Especially when religion is turned into a kind of sorcerer where only holy men have authority. In the Orthodox worldview, the burden of so-called Islamic identity must be borne by women. The core Quranic values ​​of justice, kindness, compassion and wisdom are forgotten and the focus is on outward appearance. A pious woman must be in hijab.

A woman wearing the hijab has as many choices as a woman wearing the sindoor – standards of behavior are predefined for both. The power of religion in our society is such that there are predefined ideals of a good woman and how she should look and behave. Religion can be an easy ride for misogyny and bigotry. The little girls who go to KG classes in a burqa from head to toe is a spectacle that arouses many emotions in me and surely many others. I am regularly asked: But why aren’t you in Islamic dress?

Progressive Muslims in North Africa, the Far East and other parts of the world have to face a political Islam of which the veiled woman is the mascot. The veil, imported from Arabia, is essential in Muslim societies all over the world whereas it is foreign to most of these societies. This may be due to several reasons, including the reaction of different communities to Islamophobia. But we must not forget that the veil is above all a patriarchal construction, and not intrinsic to Islam.

We are a multi-faith democracy with a Constitution rooted in the values ​​of justice, equality and pluralism. The practice of secularism has undoubtedly been deeply flawed in our politics and religious fissures have always existed. But despite communitarianism and communal riots, we have remained a plural and peaceful society. Hate speech and open calls for the genocide of Muslims, as witnessed recently by Haridwar, mean a new low for our politics. It is important that ordinary Indians – Hindus, Muslims, Sikhs, Christians – reject the divisive politics of hate. Peaceful coexistence, tolerance and mutual respect can overcome the politics of divide and conquer. Religiosity must be confined to the private domain. Overt display and competing religiosities can only harm us all. Political religion in our neighborhood, in Afghanistan and Pakistan, has wreaked havoc on the lives of ordinary people.

All girls must attend school, with or without a hijab. The nation will progress when girls are educated and empowered. Governments must focus on improving girls’ access to education, including higher education. They must not waste public resources and precious court hours fighting court cases to deny students choice of dress in the name of uniform.

This column first appeared in the March 18, 2022 print edition under the headline “Much Ado About Dress.” The writer is a women’s rights activist and one of the founding members of Bharatiya Muslim Mahila Andolan