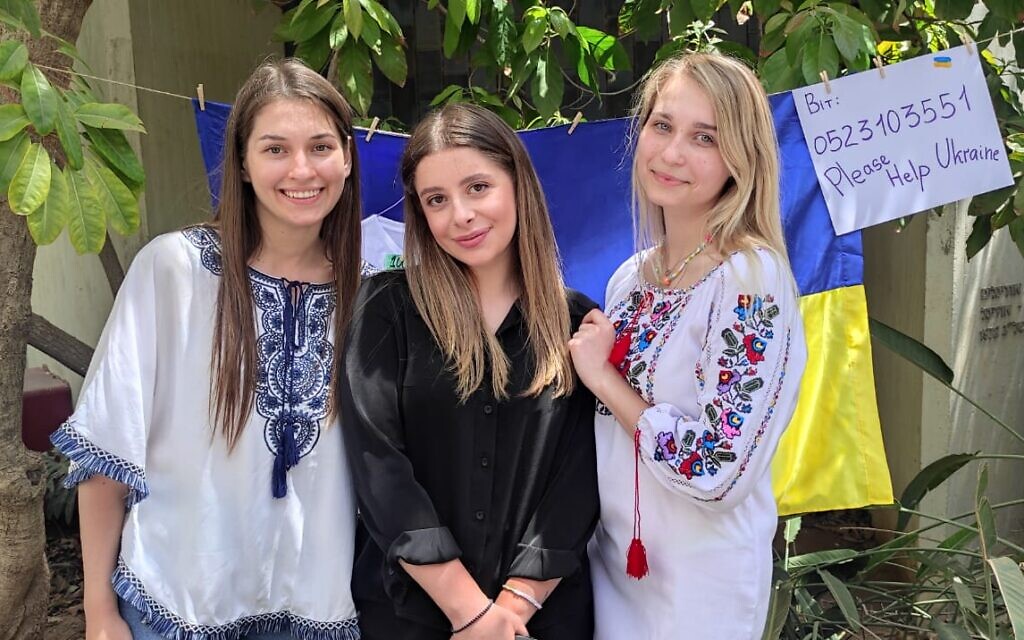 Israeli universities are stepping in to absorb Ukrainian students whose studies have been interrupted by the ongoing war.

The vast majority are women; most Ukrainian men between the ages of 18 and 60 are forced to stay at home to be called up for military service if necessary.

Nineteen students and researchers continue their work at Ben-Gurion University of the Negev in the southern city of Beersheba.

“I was forced to leave Ukraine because I was very scared for my life,” said Viktoria Taranik, who expressed her gratitude to the university for hosting her.

“My mother works under contract as a border guard on the border with Poland and she can no longer leave the country due to the difficult military situation,” she said.

“My grandparents are in the Donetsk region [in eastern Ukraine]an area where fighting has been going on since 2014. I am very worried about my mother and my grandparents,” she said.

Viktoriia Taranik (center) from Lutsk, Ukraine, is a bachelor’s student in international relations at Lesya Ukrainka Volyn National University. She is currently at Ben Gurion University in Beersheba, southern Israel, where she is participating in the semester program and enrolling in courses in political science, history and Israel studies. Right: Lior Rosenthal Almoznino, Director of the Visa and Health Insurance Unit. Left: Lila Perlman-Sophie, director of international and non-degree exchanges. (Danny Machlis, Ben Gurion University of the Negev)

Originally from different Ukrainian cities, they continue their studies in law, medicine, psychology, music and linguistics.

“I managed to talk to my family yesterday, but today the connection was cut off and I couldn’t reach them,” said Alisa, a graduate law student who is studying crisis management at TAU. . She comes from a small town near Mariupol in eastern Ukraine, an area that has suffered the most violent fighting and destruction.

Marina, a law student, was enrolled at the Ukrainian State Pedagogical University in Kropyvnytskyi, a central city which she said was quite safe at the moment.

But university premises have been converted into accommodation for people fleeing more dangerous areas, and lectures are only held online and are sporadic.

“I was supposed to graduate in June,” Marina said, “but for now, I’m just happy to be able to continue my education here at TAU.”

Earlier this month, the women sold products they had made during a two-day event and raised more than $5,000, enough to buy 86 first aid kits and 24 pairs of military boots .

At Bar-Ilan University in Ramat Gan, central Israel, four members of Ukraine’s world championship math team are already settling in, and six more are waiting to join them as soon as their papers have been completed. All are between 14 and 18 years old.

The coaches of the Israeli math team have heard of the fate of their rivals and have arranged for them to move and study at university for the foreseeable future.

“One moment all my academic hopes were cut short because of the war, and the next day I start university studies at 16 in Israel,” said Boris Holikov from Dnipro, Ukraine’s fourth largest city. “I took the opportunity almost straight away, because I know I won’t regret it.”

Leonid Diachenko, 14, from Kyiv, said: “My mother took me all the way to Poland, but then I had to say goodbye. It was really hard to say goodbye to my mother because I don’t know when I will see her. It could be a long time and I think a lot about the safety of all my family, but I have to live with it.

Over the past few weeks, the Bar-Ilan International School, led by Executive Director Ofer Dahan, has been arranging visas and accommodation and preparing an interdisciplinary academic program tailored to student needs.

“By October, the young people will take courses in mathematics, computer science and physics, and will also learn Hebrew. They will receive college credits and some of the students are expected to move on to the bachelor’s degree in October,” said Bar-Ilan CEO Zohar Yinon.

Under a separate stream, Bar-Ilan received about 50 applications from Ukrainian university students and researchers seeking admission. Thirteen of the 50 have already been absorbed and more are expected to arrive soon.

Meanwhile, the Hebrew University of Jerusalem has accepted 18 Ukrainian students, 10 of whom have already arrived.

One, Dr Anastasiia Zinevych, recalled how buildings shook at the Odessa National Economic University where she was teaching when bombs fell, severely damaging a nearby airport.

She and her husband decided to leave Ukraine with its “supermarket shelves empty of food and pharmacies without medicine”.

“All we took with us were two laptops and a copy of my husband’s poetry,” she said.

Zinev, who lives in a university-affiliated apartment, currently works with Professor Ran Hassin at HU’s Center for the Study of Rationality.

Of the other nine Ukrainian refugees, several undergraduates are continuing their studies at HU’s Rothberg International School, while several professors have joined the departments of psychology, sociology, history, Jewish studies, computer science and Agriculture of HU.

In addition, three researchers have arrived at the University of Haifa and other research students are expected to arrive in the coming days.