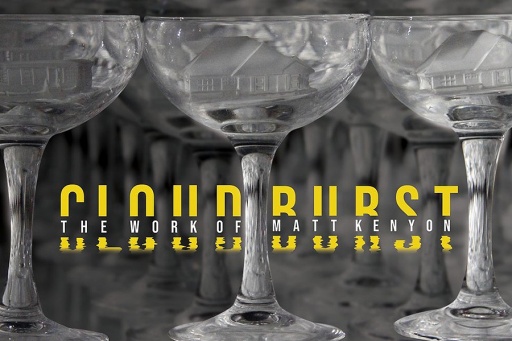 Through his work, Kenyon harvests multiple sides of complex issues and presents them through thought-provoking and enterprising creations.

He was recently invited to install a solo exhibition at the Baton Rouge Gallery in his hometown of Baton Rouge, Louisiana. The exhibition, “Cloudburst”, represents his largest and most comprehensive solo exhibition to date. One of the featured works, “TIDE”, was inspired in part by the 2016 flood in Baton Rouge, where lives were lost and 146,000 homes and businesses were damaged or destroyed. “TIDE” consists of champagne glasses stacked to create a 15-foot glass tower, with each glass containing a small house built by Kenyon. The installation, he explains, is meant to spark a conversation about the growing housing crisis and loss of property values ​​due to rising waters and climate change around the world, but particularly in Baton Rouge.

Kenyon’s collection of work covers a wide range of topics. Three microtext projects represent acts of protest and commemoration. In “Alternative Rule”, the lines on the paper are made up of the names and dates of children who have been victims of gun violence since the Columbine High School shooting; in “Notepad”, each straight line is revealed to be micro-printed text listing the full names, dates, and locations of every recorded Iraqi civilian death during the first three years of the Iraq War; in “Log Rule”, the names, dates and locations of those who died of COVID-19 are preserved in the microprinted text of the lines themselves. Kenyon is offering sheets of paper to all who wish to remember, in the hope that the tragic scale of loss we have faced due to COVID-19 may enable us to move forward towards a more equitable future.

“Art and design are part of this national conversation to help inform policy on things like housing insecurity, climate change and gun violence,” Kenyon said.

He worked with the gallery to organize a series of roundtables with members of the Baton Rouge community and various city leaders. During a panel titled Without housing #19, which references Baton Rouge having the 19th highest eviction rate of any US city, visitors heard from people on the front lines about the issue of housing affordability, quality and resilience in the local level. A panel on gun violence discussed findings from a Southern University professor’s study of mass shootings, as well as insights from local nonprofit leaders and a board member school of the EBR parish. Another roundtable explored what climate change means for Louisiana as a whole – from wildlife to indigenous communities to urban planning.

“I think it’s a good example of how the idea of ​​art and design brings people together to tackle these big, thorny issues,” Kenyon says.

The Baton Rouge exhibit was featured in The Advocate before it closed and was returned to Kenyon’s studio in Buffalo. “TIDE” was produced under the Kenyan Humanities Institute Fellowship.

Currently, Kenyon and artist Jason J. Ferguson have a joint exhibit at the Tri-Main Center’s Buffalo Arts Studio, “Homing,” which includes a variety of artworks that encourage visitors to reconsider the notion of domesticity at through a combination of ideas, metaphors and objects that are inspired by aspects and images of the house.

Kenyon and Ferguson had worked together around this theme in 2013 with the exhibition “(in)Habitation at the Museum of Contemporary Art in Detroit. Kenyon says revisiting the theme is an opportunity to refine it.

“The world has undergone social and political dismantling, forcing many to turn inward to reflect and reassess what is truly meaningful in their lives,” he says. “‘Homing’ addresses the heightened intimacy of home, while challenging the invisible systems that govern daily existence.”

“Homing” includes Kenyon’s latest version of “TIDE,” which he tweaked in the few weeks after Baton Rouge.

“Right now I’m showing a variation of the ‘TIDE’ project, where the upper segment of the glasses will be dislocated and upside down,” he says.

The ability to create is something Kenyon says is a perk of being at a university like UB.

“My works are researched extensively, and the great thing about a great research school is that the professors and graduate students have the resources and expertise to carry out ambitious projects,” says- he.

Kenyon, Associate Professor of Art, directs the graduate program. It is part of PLATFORM, UB’s socially engaged design studio, and the university’s Center for Information Integrity.

His works have used robotics, living organisms, custom software and more to create dynamic and elegant metaphors aimed at shedding light on discussions surrounding some of the most pressing issues of our time. He was named a TED Fellow in 2015 and his work is in the permanent collection of the Museum of Modern Art and has been exhibited around the world.

“Homing” at Buffalo Arts Studio runs through November 4. Kenyon is also preparing for an exhibition in Portland, Oregon.

“It’s a group show called ‘Probably Just the Wind’ and features a slew of artists like Dread Scott and Hans Haacke,” says Kenyon. “In this exhibition, we challenge visitors to look death in the face.”