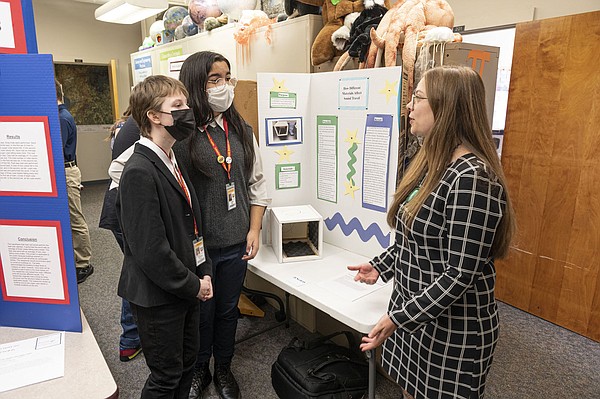 The Robert Noyce Scholarship Program for Teachers at the National Science Foundation at the University of Arkansas is accepting 10 additional students. For more information, visit tinyurl.com/23zk9ab3.

A new scholarship at the University of Arkansas is giving aspiring science and math teachers a head start in their careers by mentoring middle school and college students.

Students from 11 other area school districts also participated in the science fair.

The university last year received a $1.4 million grant from the Scholars Program to fund tuition and fees for the one-year Master of Arts in Teaching at the University of Arkansas , according to Bill McComas, professor of science education.

The first eight students, known as Noyce Scholars, are expected to graduate from the program in May, and there are 10 more places to be filled over the next three years, McComas said.

The scholarship encourages people with a bachelor’s degree in a STEM field to consider teaching, he said. STEM stands for science, technology, engineering and mathematics.

The program prepares participants to earn their Arkansas Teacher’s License for students in grades 7-12 in biology, chemistry, physics, or math. Once they graduate and begin teaching in a high-needs school district, they will receive a stipend of $10,000 per year for their first four years of teaching in addition to their salary, McComas said. In total, students will receive about $60,000, he said.

About 60% of schools in the United States are considered high-need and there is a shortage of teachers in STEM fields, McComas said.

A school district in need is defined by a National Science Foundation criterion as a district in which at least one school has 50% or more of its students eligible for its free and reduced-price lunch program – a common indicator of poverty in one district, according to the university’s Noyce Scholarship webpage.

“The good news is that teaching is fabulous work and if people want to be a teacher there will be openings,” McComas said. “It’s almost a guarantee to start in a great job.”

The four-year commitment to teaching encourages people to stay in the profession long enough to really know if they want to stay there long-term, McComas said.

The university partnered with the Springdale School District for the science fair project, McComas said. The district hasn’t participated in science fairs in recent years, but was ready to start again with the program’s support, he said.

The Noyce Scholars worked in pairs under the supervision of teacher mentors, he said. Graduate students mentored middle schoolers either in extracurricular science clubs or during free time. Funding for the science projects was provided through the grant, so there is no cost to the school district, McComas said.

Noyce’s colleague, Samantha Middleton, said she and her teaching partner began preparing for the science fair in August and have been working on it non-stop since. They worked with students at Lakeside Junior High School during free time about twice a week, she said.

Middleton said she was initially interested in studying life sciences in graduate school, but focused on education when she found out about the university’s master’s program. At the time, the scholarship had not yet been awarded, but once it became available, professors encouraged her to apply, she said.

Because she has a strong background in science but not necessarily education, the program has helped her learn to share her knowledge with students through authentic learning experiences, Middleton said.

“I think the experiences I’ve had through Noyce will make me a truly unique teacher,” she said.

Noyce’s colleague, Logan Seims, said she was studying physics and math and wanted to get into teaching, but didn’t know how to go about it until a teacher visits her class to talk about the Noyce scholarship.

“I knew I would like it, but I was surprised at how much I love teaching,” she said.

Seims said working with students one-on-one developed his confidence in his ability to build relationships with students. The science fair gave middle schoolers authentic practice to get a feel for what scientists are doing, she said.

The program focuses on authenticity and agency, McComas said. Agency comes into play when people see themselves doing science.

“It seems to me that a science fair is really the most authentic thing you can do,” he said. “When else can you be a scientist.”

Fair trade projects span weeks and months, and middle schoolers have to work through frustration, he said.

Stephen Burgin, associate professor of science education, said he noticed Noyce fellows had more ability to talk about what it means to do science.

“I have much more confidence that these prospective teachers can mentor their own students through things like a science fair,” Burgin said.

“I feel like I’m better prepared to be a science teacher eventually,” he said.

Laura Kent, associate professor of math education, hopes the Noyce Scholars will grow as leaders in their fields and help the Education Department learn better ways to recruit more people to teach STEM subjects. She also hopes that students will continue the science fair component in the districts in which they are hired, she said.

The long-term goal is to get more kids interested in math and science, Kent said.

Kim McComas, an associate professor of education and wife of Bill McComas, collects informal and formal data on Noyce Scholarship outcomes as part of the project. Feedback from interviews with graduate students in December was positive, she said.

Although she didn’t have the opportunity to interview middle school students on Friday, Kim McComas said she saw the students’ excitement on their faces.

“They were so excited to be here and so proud of what they had done,” she said.

Lilly Lee, an eighth grader, said she has always had an interest in science and engineering and sees the science fair as an opportunity to explore a career in STEM. Her science project focused on the impact of caffeinated coffee on the growth and height of French marigolds, she said.

She planted the flowers and watered one group with coffee and the other with plain water. Her experiment showed that coffee had only a slight impact on plants, causing them to grow 0.25% less than their counterparts with plain water, she said.

Lee said she learned the scientific process, as well as time management, planning ahead, and writing and measuring variables. Her involvement also taught her confidence and confirmed her interest in a career in science, she said.

Kiersten Deen, a science teacher at Lakeside Junior High, mentored a graduate student and served as a liaison between the Noyce scholar and the middle school students in his class.

The middle schoolers who chose to participate this year are already looking forward to next year’s science fair, Deen said. Lakeside serves a population of very low socioeconomic status, so the opportunity to get involved in the science fair and visit the University of Arkansas was very exciting for the students, she said.

“I think it’s very beneficial for them,” she said.

Ty Murdock, left to right, a Noyce Scholar at the University of Arkansas studying teacher education, chats with Kayla Tittle and Summer Pononar of Central Junior High in Springdale about their participation in the science fair . Murdock mentors a science student at his school as part of his scholarship. (NWA Democrat-Gazette/Spencer Tirey)