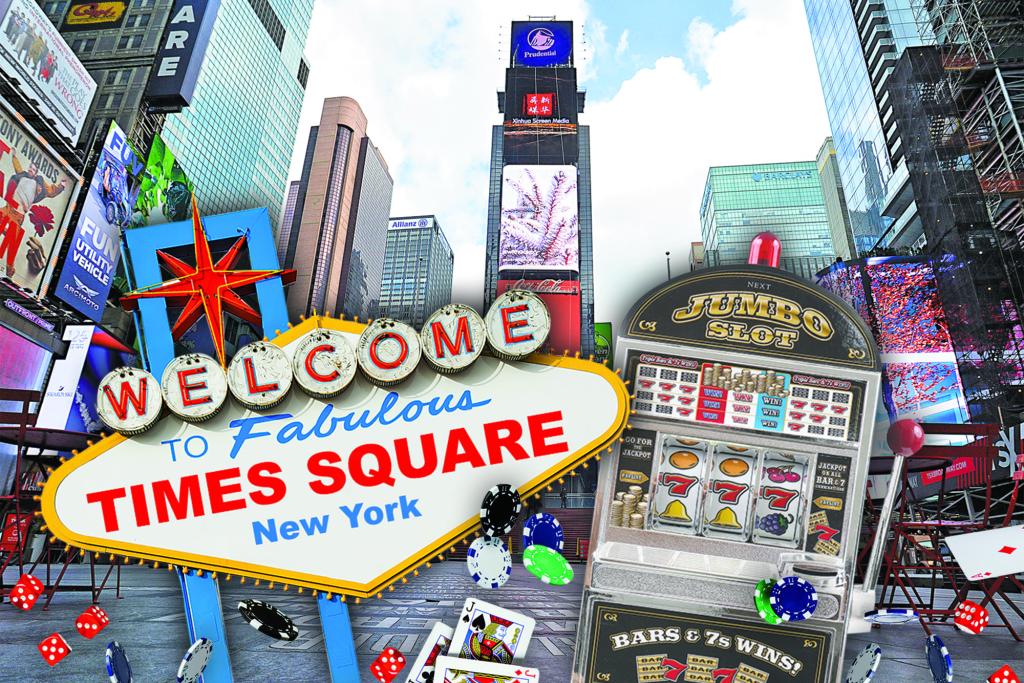 Times Square is coming back from the pandemic. “Ghost town” is a vague memory. Theaters and restaurants are packed. Companies are renting more floors in office towers even before the buildings fill up again with living human workers.

As daily foot traffic of 350,000 nears pre-pandemic levels, the last thing the ‘crossroads of the world’ needs is casino gambling. The sleight of hand is being pushed by the usual suspects — real estate and hotel companies and labor unions — and abetted by Governor Kathy Hochul, who could immediately lift the statewide ban on new casinos that is currently in force until 2023.

It’s a snake oil game that will make Times Square and the public snake-eyed. What Times Square needs is more cops, not slot machines.

If visitors want to gamble, they can bet $23.99 on Bubba Gump’s industrial-grade shrimp — or getting their picture taken with Elmo without being taken to the cleaners.

Let’s start with the obvious: in a world awash with casinos, including in the US, and in the midst of an online betting boom, why does a gambler need to go to Times Square? They don’t. The casino push there has one goal in mind: to enrich developers, hotel operators and union members, none of whom are likely to suffer if the sites fail and taxpayers pay the bills.

Casino supporters are drooling over the supposed tax benefits and job creation. But case after case has shown that casinos are almost always a financial mess. Too many of them in the United States have gone bankrupt, including in Atlantic City, where taxpayers must bail out several underperforming properties.

In fact, casinos generate a so-called regressive tax, meaning they suck funds from people who can least afford it. Forget James Bond and the tuxedo-clad oligarchs fighting in Monte Carlo. The poor gamble much more than the rich. Just look at the sad-faced grandmothers who take the bus for the Atlantic City ride and return home poorer.

Times Square has done so well without slot machines that TikTok and Roku recently moved their local headquarters there. Even a major educational institution, Touro College, has set up a huge “campus” inside one of the office buildings. Huge new hotels like the Hard Rock and the Riu Plaza have opened in the belief that the decline of the pandemic will justify the investment.

But one thing stands in the way of continued progress: crime, which jumped 20% in the first quarter of this year compared to the same period in 2021. High-profile horrors in Times Square have included women pushed to their deaths on the subway tracks and show spectators caught in the crossfire.

The peril extends beyond NYPD statistics. Although the area is not the open-air drug market and mugging ground of 30 years ago, any walker, office worker, or tourist can see and smell (thanks to pot everywhere) the menace.

I am much more alert than just three years ago. The Three-Card-Monte hustlers aren’t back – at least not yet. But I’m often harassed by kids trying to sell me fake CDs and even more sleazy characters, like the ones who wandered into the Longacre Theater in a downpour a few nights ago after a performance of “Macbeth.”

That’s what we need to tackle now – not the imaginary advantages of casinos, the worst bet the city and state would ever make.