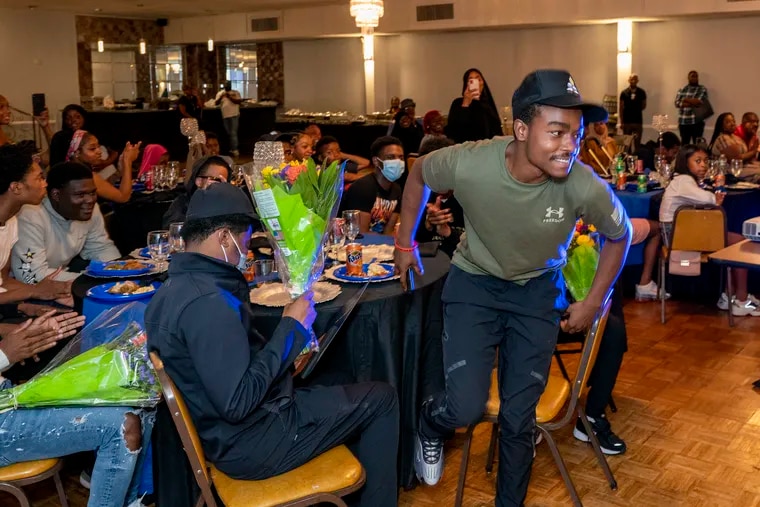 The Carpentry Academy gives its graduates the tools to succeed

Poverty is at the root of much of the gun violence that plagues Philadelphia and other major cities.

Not all, but quite a bit, and there are far too many illegal guns on the streets. Any program that provides at-risk youth with the resources and job skills to support themselves and their families financially can help reduce the economic disadvantages faced by so many of the city’s youth.

That’s why programs like Unity in the Community’s Carpentry Academy are so essential. The academy, which South Philly activist Anton Moore started last year, not only teaches participants how to hang Sheetrock and install flooring, but also pays students a weekly stipend of $150. I wrote about the program last summer, when early enrollees were still figuring out how to use their brand new toolkits. The day I was observing, instructor George Palmer demonstrated the proper way to operate an electric saw.

Fast forward to a year later, all participants have gained experience using power saws and everything else in their tool kits. The young people rehabilitated an outdated kitchen at the Dixon Community House in Point Breeze, built dressers and carried out all kinds of repairs.

On Monday, the Carpentry Academy closed its inaugural year with a graduation dinner at the South Philly headquarters of the NoMo Foundation. By the time I arrived people were already eating and the music was playing. The ballroom was swarming with proud parents, city officials and, of course, happy graduates, who each will receive $350 for completing the program.

There was a lot going on in that room. But my ears perked when Ryan Boyer – who became the Philadelphia Building and Construction Trades Council’s business manager after John “Johnny Doc” Dougherty resigned last year – announced from the podium that every graduate would be accepted into a apprenticeship program, provided he completed the program requirements and were drug-free.

“There is demand in all aspects of construction. We have a building boom like we’ve never seen before,” Boyer told me afterwards. “With the infrastructure [law] this [President Joe] Biden has passed, we are going to need new construction workers. You have the building of the main universities. You have the proposed Sixers building. In fact, in 2022, we had more building permits than we’ve ever seen in Philadelphia’s history.

I asked, Will you have difficulty finding enough workers?

He replied, “We won’t because of programs like this.”

As each graduate stood to accept their plaque and City Council citations on Monday, I thought of all the new opportunities that would be available to them now, thanks to Carpentry Academy. According to the United States Bureau of Labor Statistics, the average annual income for carpenters in Pennsylvania is $53,470.

As well as teaching participants practical skills, the Carpentry Academy also provided mentorship from men such as Palmer, who stood up from his seat at a table where he had eaten and literally cried when the graduates walked away. advanced to be recognized. “I’m crying because I’m so happy. I love them as my sons,” he said. “They can do Sheetrock, floors, doors, light electrical. They installed ceiling fans. They also did outlets and light plumbing.

Watching, I couldn’t help but cry a little too.

At a time when so much is wrong in Philadelphia, it felt good to celebrate young men doing the right thing. Not only figuratively, but literally, they received their flowers that night – each young man received a bouquet.

“You have accomplished something that will allow you to be independent in your life – to work when you want to work and earn as much money as you want to earn legally, and to really have the skill to fix your house and make things for your friends,” Mayor Jim Kenney said when it was his turn on the microphone. “I don’t have the ability to drive a nail in the wall. Every time I want to do something in my house, I have to call someone because I’m afraid I’m going to mess it up You’ve been under the tutelage of some extremely skilled people, and I’m telling you, I couldn’t be more proud of you all.

Judging by the looks on everyone’s faces that night, we all felt the same way.