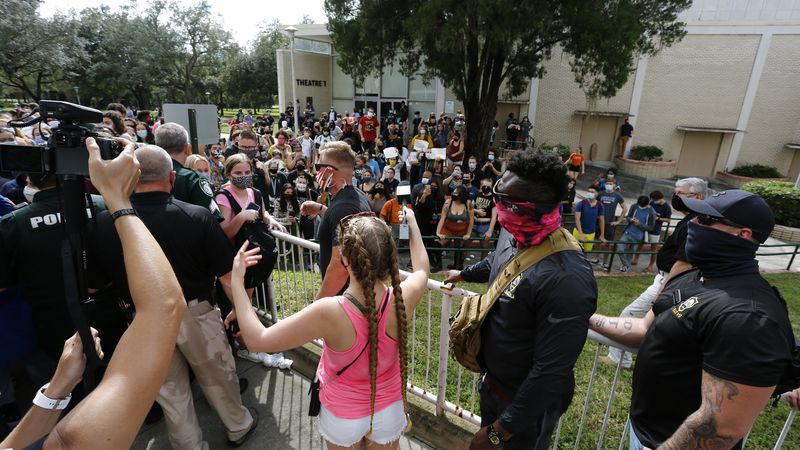 State University Faculty, students will be asked about beliefs

TALLAHASSEE – In his continued fight against “indoctrination” of students, Governor Ron DeSantis on Tuesday signed a law that will require public universities and colleges to survey students, faculty and staff on their beliefs and views to support “intellectual diversity”.

The survey will determine “to what extent competing ideas and perspectives are presented” in public universities and colleges, and inquire into whether students, faculty and staff “feel free to express their beliefs and points of view. view on campus and in the classroom, â€according to Bill.

The measure, which will take effect on July 1, does not specify what will be done with the survey results. But DeSantis and Senator Ray Rodrigues, the bill’s sponsor, suggested Tuesday that budget cuts could loom if universities and colleges turn out to “brainwash” students.

â€œIt’s not worth taxpayer dollars and it’s not something we’re going to support in the future,â€ DeSantis said at a press conference at a college in Fort Myers.

Faculty members at the university fear that the new measure will create a chilling effect on their freedom of expression. Democratic lawmakers have also argued that the bill could allow politicians to interfere in, monitor and regulate speech on campus in the future.

DeSantis, however, said the intent of the measure is to prevent public universities and colleges from becoming “hotbeds of outdated ideology.”

â€œIt used to be that a college campus was a place where you were exposed to a lot of different ideas,â€ DeSantis said. â€œUnfortunately, now the norm is that these are more intellectually repressive environments. You have orthodoxies that are promoted and other points of view are rejected or even suppressed.

The governor has not named specific universities or state colleges with this problem. He was broad in his accusations against the higher education system and used vague anecdotes to justify the need for such an investigation.

For example, the governor said he “knows a lot of parents” who fear that their children will be “brainwashed” when they go to college, and that universities encourage “orthodoxies.” But he did not provide details on these allegations.

Officials at some of the state’s top universities, including Florida State University and Florida International University, did not immediately respond to requests for comment on the governor’s claims.

The University of Florida issued a statement that supported the Gainesville-based school as a “marketplace of ideas where a wide variety of opinions are expressed and where independent inquiry and vigorous academic deliberation are valued.”

“We believe the survey will reflect this, and we look forward to broad participation on campus,” the statement said.

But in what appeared to be a coordinated effort, Senate Speaker Wilton Simpson, R-Trilby, and House Speaker Chris Sprowls, R-Palm Harbor, criticized universities for their lack of “diversity of thought.”

Sprows echoed some of that sentiment during the governor’s press conference.

“As the governor said, we are at great risk, as a nation and as a state, of the lack of intellectual diversity that exists on our college campuses,” Sprowls said. “We decided that an ideological standard would win, but the problem is, we lose because we don’t have real conversations.”

Debate during the legislative session

In House and Senate committee discussions ahead of the bill’s passage, Democratic lawmakers feared Republican leaders would use the results of the investigation against higher education institutions.

Senator Lori Berman, D-Boynton Beach, asked Rodrigues, R-Estero, if the information could be “used to punish or reward colleges or universities?” She wondered, “Could professors be promoted or fired because of their political beliefs?” ”

Rodrigues said no. But the wording of the bill and the statements made on Tuesday do not support this claim. The bill also offers no guarantee that the survey responses will be anonymous, and there is no clarification on who can use the data and for what purpose.

What is specified is that the board of trustees of the state university system and the state board of education will be required to select or create an “objective, non-partisan and statistically valid survey”, presumably through government procurement or the rule-making process.

In addition to the investigation, the measure signed by DeSantis will prohibit university and college officials from limiting speech that “may be uncomfortable, obnoxious or offensive,” and will allow students to record lectures without consent for educational purposes. or to support a civil or criminal case against a higher education institution.

During debate on the bill in the Senate, Rodrigues said students should be able to “shed light” on wrongdoing in a classroom. Professors, however, would have a civil cause of action against any student – whether adult or minor – if they release the recording for any other purpose.

DeSantis did not go into all the details of the bill, but praised it in general terms, saying it will allow “a strong First Amendment discourse on our college and university campuses.”

DeSantis’ push to promote ‘intellectual diversity’ and competing ideas on college campuses comes two weeks after it defended a ban on specific classes and discussions in K-12 public schools linked to the scope of racism in American society.

At DeSantis’ request, the state Board of Education voted to ban classes and discussions on the concept of Critical Race Theory and the “1619 Project.”

Related: Florida Board of Education votes to keep critical race theory out of schools

None of Florida’s school districts taught theory before the ban, state education officials have acknowledged. But DeSantis, ahead of his 2022 reelection bid, spoke out against Critical Race Theory, a legal academic concept that examines systemic racism in American institutions and policies because he says it is about of an attempt to indoctrinate children against the United States.