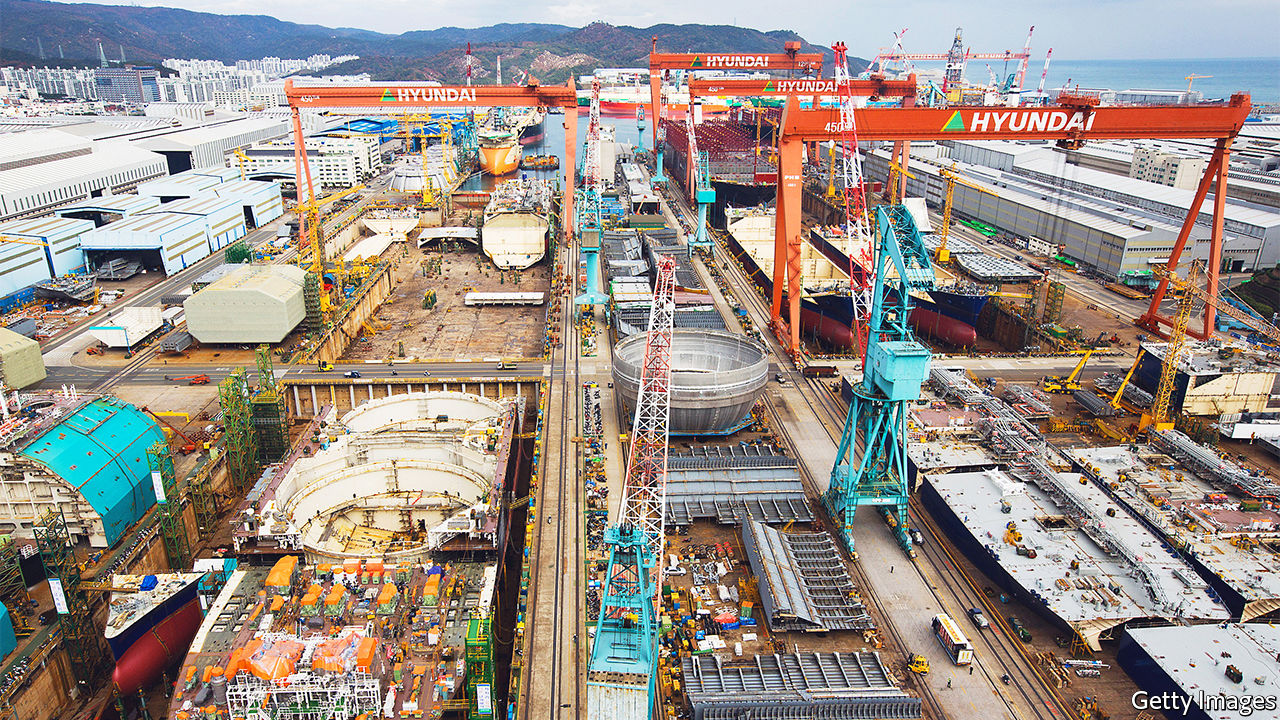 “IF WE MAKE well, the country is doing well, and if the country is doing well, this is the way for us to do well, â€reads the inscription on the walls of the former Hyundai Heavy shipyard in Gunsan on the west coast of South Korea. The quote from Chung Ju-yung, the late founder of Hyundai, one of the country’s largest conglomerates, is a good summary of South Korea’s development strategy. Equating manufacturing prowess with national interest led to the massive state-led investment in heavy industry that made South Korea rich.

Enjoy more audio and podcasts on ios Where Android.

Today, fading letters are an ominous sign of things to come. Four years ago, the Hyundai shipyard and the DG the Gunsan auto plant closed ten months apart, resulting in the loss of tens of thousands of jobs. There is a risk of such devastation in the future. The country’s industrial behemoths do not have a clear plan to phase out greenhouse gas emissions by 2050, which the government has promised to do. How they do it will determine the future not only of South Korea’s industries, but also of its industrial cities.

South Korea’s coastal cities are the most visible markers of the country’s rapid industrialization. From the 1960s, sleepy fishing harbors and trading posts transformed into sprawling industrial centers, filled with shipyards, auto factories, steel mills, oil refineries and container terminals. Industry generates 37% of GDP, compared to the rich country average of 27%, and more than 80% of exports. GDP per person in Ulsan, the most important industrial city, is 75% higher than the national average. In a city museum, you can walk around model versions of industrial facilities to soak up the story Ulsan wants to tell about herself. â€œWe went from GDP $ 100 per person for that, â€shines Shin Hyeong-seok, the director of the museum.

But as South Korea joins the rest of the world in its efforts to tackle climate change, its centers of heavy industry are turning from engines of growth to liabilities. Their dependence on fossil fuels is one of the reasons South Korea is the world’s seventh largest emitter of greenhouse gases. President Moon Jae-in has pledged to reduce emissions by 40% from 2018 levels by 2030, and that South Korea will be carbon neutral by 2050, a target that has been enshrined in law. in August.

Environmental groups stress that Moon’s targets are still insufficient to meet South Korea’s commitments under the Paris agreement. The government itself freely admits that it is lagging behind other rich countries in reducing emissions. But the announcement alarmed industry representatives. They warn of large-scale production cuts and job losses unless companies are given more time and support to meet targets.

The transition to a low-carbon economy, if pursued seriously, will be the biggest challenge for manufacturers since the transition from light to heavy industry in the 1970s, says Park Sang-in, a economist who focuses on South Korean conglomerates at Seoul National University. . The fact that South Korea is so late in the game makes it more difficult, as larger cuts will now have to occur over a shorter period of time.

If the government is to meet its targets, carbon-intensive manufacturing industries will have to reduce their emissions by up to 80% over the next three decades (the carbon still emitted will have to be captured and stored in facilities yet to be developed). Deindustrialization and the transition to more energy efficient services would be one way to achieve this. But given the importance of manufacturing to the economy, the consequences for workers and the industrial centers where they live would be devastating. The only alternative is for industries to change. “We don’t want to lose the role that these industries play in the process of economic growth, so it is essential that they are transformed,” says Kang Sung-jin, who is studying industrial development at Korea University in Seoul.

What will this transformation look like? Factories that make gasoline and diesel cars will have to switch to manufacturing batteries and electric vehicles. Shipbuilders will need to produce carriers that run on greener fuels, and the petrochemical industry will need to provide these fuels. The steel furnaces will have to run on something other than coal coke. Electricity for both industry and households, now produced mainly by coal-fired power stations, will have to come from renewable sources.

As with the shift from light to heavy industry, the change will be most visible in industrial cities. In the future, the government is considering places like Ulsan and Gunsan to be connected to huge offshore wind farms and covered with solar panels. Green hydrogen will power new generation container ships and carbon neutral steel furnaces.

The government’s most recent plans have prompted companies to act. Yet the lack of preparedness means the road to net zero is likely to be bumpy, with industries vulnerable to shocks. In addition, there is no guarantee that pledges will survive the next election. Climate change is not yet a big issue in the presidential election campaign, and the next government might not feel the need to keep the pressure on the conglomerates.

This means that many South Korean industrial centers could end up looking more like Gunsan, as investments in green technologies produce results in other countries and higher emissions render some of South Korean industries obsolete. The government’s efforts to find new jobs for the laid-off Gunsan workers have only progressed slowly. Thousands have left the city.

On the site of the former colonial port, where city authorities have launched a series of urban regeneration projects, visitors to a large ship-shaped museum can relive the experience of the rice trade in a 1930s version. from the city. Unless South Korea’s green economy booms, the Ulsan Museum on the opposite coast may soon acquire an old-fashioned-like vibe. â–