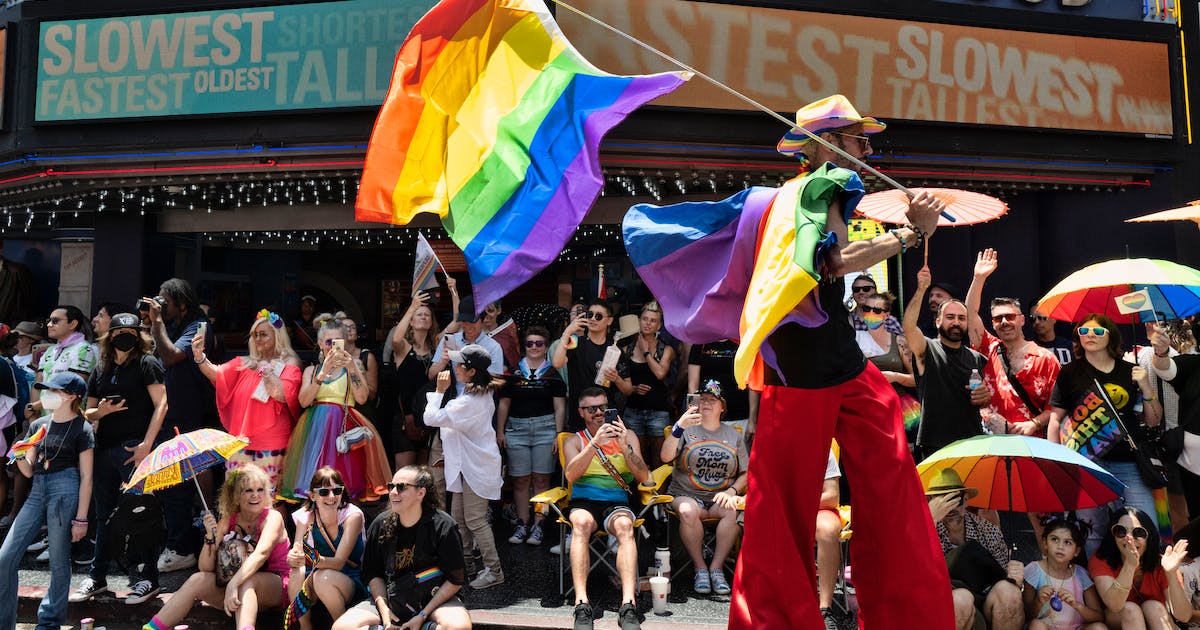 LGBTQ people have experienced a lot of harassment and intimidation. We should not participate. Instead, we should stand up.

The change we want to see happen is that LGBTQ people don’t have to face threats just because of who they are.

You may not know what it’s like to be bullied just because you’re LGBTQ, but if you are, make sure you and others don’t have to feel it again. standing up for LGBTQ people. When I was 7, I still wondered if I was a lesbian or not. In my class, there was this thing where people flipped an eraser and one side said yes, and the other said no, and the middle said maybe. Someone in my class said, “Am I a lesbian: yes or no? He landed on yes. Everyone who heard it looked surprised, but I didn’t know if I was a lesbian or not. Later in the school year, someone said the word “lesbian” and said I was a lesbian. I said, “So you have a problem with that?” He said, “Only weird people are lesbians.” I started to cry from sadness and rage. I ran to the corner of peace to get peace. After that, he called me a “lesbian weirdo” for the rest of the day. I never wanted to forgive him, but I ended up forgiving him. Forgiveness is the key to friendship.

Being LGBTQ is one of the things that makes you, you. If anyone makes fun of that, shame on them. Being LGBTQ is part of your own body. If someone makes you feel bad for being LGBTQ, just remember that you’re only yourself if you’re LGBTQ. Being LGBTQ leads you to your true gender and your love.

The writer is a third year student whose name is withheld due to her age and the sensitivity of the subject.

As other states consider legislation to lift bans on non-physicians providing abortion care (“With Roe in doubt, states weigh in on letting nurses perform abortions,” StarTribune.com, June 1), Gender Justice, in partnership with The Lawyering Project, filed a lawsuit, Doe v. Minnesota, to strike down Minnesota’s outdated 1974 law that makes it a crime for non-physicians to provide abortion care. The plaintiffs in Doe v. Minnesota include a certified nurse midwife who seeks to provide abortion care to her patients but, as a non-physician, is prevented from doing so under threat of criminal prosecution.

Extensive medical evidence shows that advanced practice clinicians and other nonphysician providers can provide medications and vacuum aspiration abortions as safely and effectively as physicians. Many medical societies and professional organizations, including the American College of Obstetricians and Gynecologists and the World Health Organization, endorse advanced practice clinicians who provide abortion care.

Other laws undermining abortion access in Minnesota that we are challenging in our lawsuit include requiring physicians to make inaccurate and irrelevant statements about abortion to patients; wait times that delay care; and onerous parental notification requirements for minors. These laws are not only medically unnecessary and harmful to people seeking abortion care, they are unconstitutional. The Doe v. Gomez of the 1995 Minnesota Supreme Court enshrined abortion access as a fundamental right in our state, noting that “few decisions” are “more intimate, personal and profound than a [person’s] decision between childbirth and abortion.

Regardless of Roe’s fate, abortion is a protected right in Minnesota under our state constitution. Doe v. Minnesota has the potential to ensure that this right exists in practice, without the interference of medically irrelevant and unlawful barriers to care.

The author is legal director at Gender Justice.

I am a 17 year old high school student who hopes to live long enough to see abortion banned in our country. And yes, I am a devout Catholic (unlike our President), but whatever my religious beliefs, abortion is very clearly something that must be eradicated from a simple scientific and logical point of view in accordance with the Constitution . The United States Declaration of Independence states that every human being has the right to life, liberty, and the pursuit of happiness. It is horrible that we have fallen so far from this value to the point of denying these basic rights to the most vulnerable in our society — the unborn.

As soon as it is conceived, this baby has its own DNA and its own life. It is not simply a religious ideal, as many have tried to claim, including Stephen B. Young (“Abortion Rights, Religious Freedoms,” Opinion Exchange, May 29). This is a scientific fact that we should really care about. As a teenager growing up in this broken world, it’s horrifying to me that people can even consider slaughtering their own children so they can carry on doing whatever they feel like. It is the duty of the government to protect this fundamental right to life.

As Saint John Paul II said so well: “A nation that kills its own children is a nation without hope. I pray that we will one day soon return to the fundamental values ​​on which our great country was founded and reject the terrible crime of abortion.

Could the absolutist view of abortion — think Texas and Oklahoma with six-week abortion bans — actually be ironically dehumanizing? Think, consider, imagine, remember parents what it takes to raise a child: the care, the effort, the sympathy, the learning, the sacrifice, the imagination, the mystery and the learning of the part of the parent and the child. How can we consider all this task of humanization if we fail to make the distinctions of conception, zygote, “acceleration”, viability and personality. And yes, from abortion at the earliest stage, we take human life – what else could it be: animal life, plant life, cosmic life? Thus, abortion implies a sacrifice: a sacrifice for another sacrifice. This is the human dilemma we face in our constant upward fall to form consciousness and become persons. In light of this human journey, why would one wish for the state to intercede at an early stage of development to undo the work of moral discernment on the part of the individual and legalize what should be of soul and mind? ?

What a pleasant surprise to read “Raising cash with cookie paste” by John Reinan (June 11), especially since last week I literally planned out the details of a future road trip to Eagle Bend with one of my daughters . As an artist-in-residence (featured in the Minneapolis Tribune’s “Picture” magazine in 1972) in my early twenties, I had lived in this small town with my young family. We had bought a house there with a few acres. We were hardworking, involved in the community, and lived hippie (but drug-free), relatively frugal but happy, creative, and idyllic lives, including organic gardening and beekeeping. I was happy to see mention of some of the people I had known since that time, including the inspirational teacher, the late Kay Nelson, and Sharon Harris (who had once kindly babysat the aforementioned girl).

During our visit, we plan to buy a few cookies, but not too many if there are any available.

Why fewer high school graduates are going straight to college