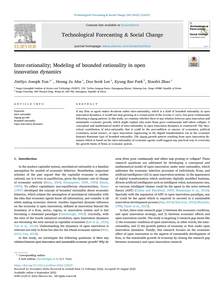 Presentation of a new decision-making model based

□ Senior Researcher of Electronics and Information System Division of DGIST (Chairman Kuk Yang) (Also Assistant Professor of Graduate School of Public Administration, Seoul National University) The research team by Yoon Jin-hyo established the “inter-rationality” model, which inherited the bounded rationality model. It is expected to be able to present an economic and technical alternative capable of overcoming the growth limits of the modern economic system.

□ However, modern society is in an era of “open innovation” based on interaction where ideas, knowledge and technology flow freely in both directions alongside the development of social networking services (SNS). It may be somewhat inappropriate to apply the existing decision-making model of bounded rationality in its current form to today’s society.

□ The research team led by Dr. Yoon Jin-hyo from the Electronics and Information System Division of DGIST recently established the model in a relationship-based theory called “inter-rationality”, which inherits the model of bounded rationality that they have been studying for over ten years, based on economics and the economic model of open innovation.

□ This model provides the reason why a company, which makes decisions based on the rationality of interaction in an open innovation structure, does not stop growing at a specific time but continues to grow. Furthermore, it establishes a microeconomic theoretical basis for firm-level activities called open innovation. It is expected to have a profound impact on academic development in the related field.

□ In particular, Professor Park Gyeong-bae from the Department of Business Administration of Sangji University, Professors Ahn Heung-ju and Lee Doo-seok from the School of Undergraduate Studies, and Principal Researcher Cho Hyo -bi of the Electronics and Information System Division at DGIST participated in this study to establish mathematical and systemic concepts and expanded the applicability of the model from various angles.

□ Senior Researcher Yoon Jin-hyo from the Electronics and Information Systems Division of DGIST said, “The results of this study are expected to play a major role as a basic theory for the development of deep learning and big data, which are global key industries in the era of digital transformation,” adding, “I will do my best as a researcher so that Korea can create more research output from world class in the post-catch-up era.

□ This study is the result of the constant support of the DGIST, and it has been published in Technological forecasts and social change (TFSC), one of the top three global journals in the field of innovative economics, in September 2022.

The title of the article

Disclaimer: AAAS and EurekAlert! are not responsible for the accuracy of press releases posted on EurekAlert! by contributing institutions or for the use of any information through the EurekAlert system.