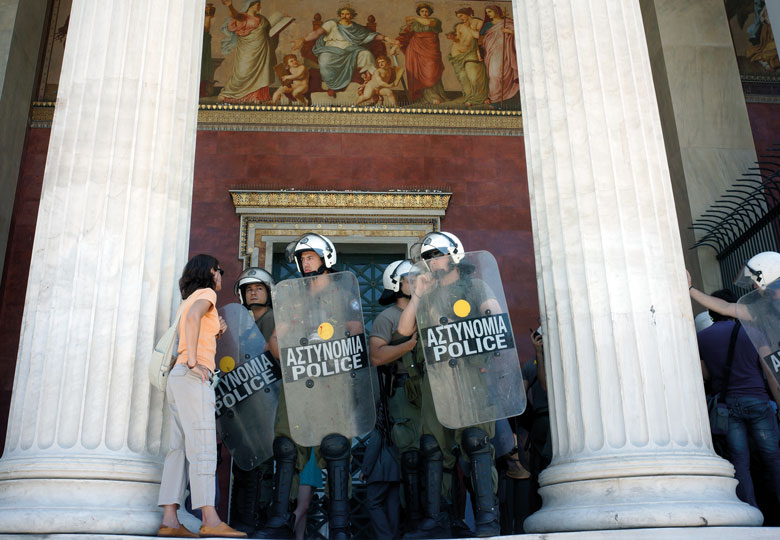 Greece is the academy’s former birthplace, but it’s a turbulent 20th century that explains contemporary street battles over campus policing. And while many are tired of lawlessness and criminality, the inseparability of national and academic politics makes normality an elusive prospect.

The current state of affairs dates back to the early hours of November 17, 1973, when a tank smashed through the gates of the Polytechnic of Athens, now the National Technical University of Athens (NTUA), during a a crackdown on student-led pro-democracy protests on campus. Disgust at the deadly attempt to crush protests helped end Greece’s seven-year military dictatorship, and the anniversary of the polytechnic uprising is still marked with dedicated memorials, marches and a day of classes in many schools.

The fact that unarmed students contributed to the return of democracy to Greece could explain why, in 1982, the concept of university asylum was enshrined in law, with state authorities banning entry to campuses without the invitation or the express authorization of the persons in charge of the campus.

Later amendments relaxed the ban while retaining protections for freedom of research and teaching. Legally, authorities can freely enter campuses to investigate serious crimes or petty offenses such as traffic accidents, but the inevitability of confrontation with anti-authoritarian student groups means they are reluctant to do it.

To dispel the stalemate, in 2021 the center-right New Democracy government created a branch of the Specialized University Police (OPPI) with around 1,000 unarmed officers, tasked with overseeing three campuses in Athens and one in Thessaloniki. But with the weight of history hanging heavy, it has yet to make an impact.

Just over 2,400 years separate Plato’s Academy from Vasso Kindi’s office, or about half an hour’s drive, Athens traffic permitting. Rather than a dappled olive grove, autumn sunlight falls on the philosopher of science through barred windows, set high in walls smeared with communist and anti-fascist slogans.

“We had a conference and we had to spend money as a department to paint the walls outside because there was all this graffiti, and some of it was obscene. I don’t want my foreign colleagues to see this. It’s really embarrassing,” said the professor from the National and Kapodistrian University of Athens (NKUA), the oldest university in the country. Times Higher Education.

A little graffiti is an offense alongside the 2013 unrest, when the streets of Athens burned with anti-austerity protests and rapper Pavlos Fyssas was murdered by the neo-fascist group Golden Dawn. Student strikes caused the NKUA campus to close for three months, but Professor Kindi managed to meet with professors from Massachusetts Institute of Technology and Harvard and Princeton universities at NKUA to form the institution’s board of trustees.

As they spoke, they received a warning that protesters had arrived to break up the meeting, fearing it was a harbinger of privatization. Delegates locked themselves in the meeting room as protesters tried to break down a door. “We couldn’t get out to go anywhere else, so we decided to call the police. We called again and again, and finally they appeared,” Prof Kindi said, adding that she and her colleagues eventually slipped through a side door.

The next day, as the meeting resumed off campus, a group of 70 activists gathered outside Professor Kindi’s office and scrawled messages on the door. Their main complaint? That she had called the police on campus.

It was in September 2022 that the specialized units of OPPI made their debut, in a curiously choreographed show at the gates of NKUA. Professor Kindi questioned why they chose the “really provocative” tactic of queuing outside the campus gates, which led to a confrontation with student activists and the subsequent arrival of relief units with riot gear and tear gas.

“After that they just left and no one saw them again,” Professor Kindi said, adding that the OPPI had refused to do more than patrol outside the NKUA campus without the support of armed officers. “I think the government is scared of the possible incidents that could happen, and we have a general election next spring at the latest. They are afraid that something ugly might happen.

Ugly things involving the police happen sometimes. Politicians and rights groups have raised concerns about the lack of prosecutions after incidents of police brutality, including against students, were caught on camera. “Young people don’t feel safe with the police. And that makes sense in a way,” said Vassilis Apostolopoulos, founder of the Liberal Panhellenic Independent Student Movement (PANKS), which is unusual among student groups in not having the support of an affiliated parliamentary party.

But ugly things also happen on campus without the police. “It all started when we said, as a group, it is not acceptable to occupy the university,” said Mr Apostolopoulos, speaking in the reception hall of the Center for Liberal Studies, a think tank with Margaret Thatcher pop art style stencils leaning against the walls, waiting to be hung.

PANKS has been attacked three times in the 18 months since this announcement, most recently in June 2022 at a party he hosted on campus. “A group of 20 to 25 thugs with helmets, baseball bats and black clothes, they walked into the university,” Mr Apostolopoulos said. “They destroyed the equipment. They hit two girls. Every time you call the police, no one comes. We tried to sue the rector, but the problem was that there was a legal loophole, because you cannot sue the rector for violence inside the university.

He believes that preventing political violence and intimidation should be the sole focus of the OPPI, if they can access campuses, with conventional police brought in to deal with more serious crimes, a separate concern but important: in September, the police raided the NTUA student’s home. halls and found knives, brass knuckles, guns and pounds of cannabis belonging to a single gang.

The raid, the second in as many years, was at the invitation of frustrated NTUA rector Andreas Boudouvis, whose large desk has splatters of fluorescent paint in the corners of the camel-colored carpet that betray an intrusion student protesters. “They don’t need permission from the rector to do their job,” he said of the police.

In May, Professor Boudouvis’ car was set on fire while he was teaching chemical engineering nearby. He believes the perpetrators live on campus. “There is a real danger and therefore certain protective measures are taken,” he said, explaining that he has police protection outside the university, but that it would be dangerous for them to d enter the campus.

Syriza Youth, a branch of the leftist parliamentary party Syriza, did not respond to THE‘s questions about how best to resolve the standoff over campus policing. In an interview with the Saraskhnio The news site Meropi Tzoufi, a Syriza MP and academic, said the creation of the OPPI was “an ultra-conservative choice” that was aimed at “repressing and disciplining” the academic community.

Claiming that Turkey was the only other European country with such a force, she argued that normal policing was sufficient to deal with “isolated incidents of delinquency” occurring on some campuses, adding that while she was at power, Syriza had not deemed it necessary to end the university. asylum.

“University authorities must and can safeguard their institutions,” she said.

For Professor Boudouvis, the bottom line is that the government must support its repeal of university asylum. “The state, through appropriate agencies – i.e. the judiciary and the police – should make it clear that the law prevails everywhere, i.e. inside and outside off campus, that criminal behavior cannot be tolerated,” he said, adding that the situation was still “not mature enough” for the police to be part of daily life on campus, and not should not be a permanent presence either.

“Rectors and deans need to feel safe and have the support of the police and the public so that they feel confident and not afraid to take action,” Professor Kindi said. “The government should show the political will to enforce the laws it voted for.”

She said it was too easy for teachers to get into the habit of quietly conceding to anti-authoritarian groups, a kind of desensitization she called “Mithridatism,” referring to Mithridates VI, the former king Anatolian Greek, who took tiny doses of poison to make himself invulnerable to assassination. Referring to university colleagues, she said: ‘They just want to be left alone, but that won’t make things any better. Without the support of the faculty, the reform will not take place.

She said the starkest example of academic acquiescence came in September 2020, when anarchists broke into the office of Dimitrios Bourantonis, rector of the Athens University of Economics and Business, photographing the clearly upset teacher posing with a sign reading “Solidarity with Squats” hanging around his neck, reminiscent of student self-criticism during China’s Cultural Revolution.

The costs of crime on campus are varied. Scholars and students may be deterred from studying, researching or teaching because of hostilities. “It is almost impossible to have activities at the university that are not accepted by the dominant left-wing students. It is inconceivable that the Minister of Education is coming to speak at this university,” Prof Boudouvis said, referring to Niki Kerameus of the centre-right New Democracy party.

He said the exception to this rule was the general secretary of the once banned Greek Communist Party, Dimitris Koutsoumpas, who was able to mobilize his own student supporters to provide security, Prof Boudouvis said. “They don’t want the police because they are the police themselves,” he said, referring to left-wing activists.

Will there ever come a day when Greek campuses will resemble those of the rest of the democratic world? “Yes, I am very optimistic that it will happen, and will happen soon, because my community, not only my colleagues but also the majority of my students, they just want like hell to be a regular campus. It will come, I am sure,” said Professor Boudouvis.