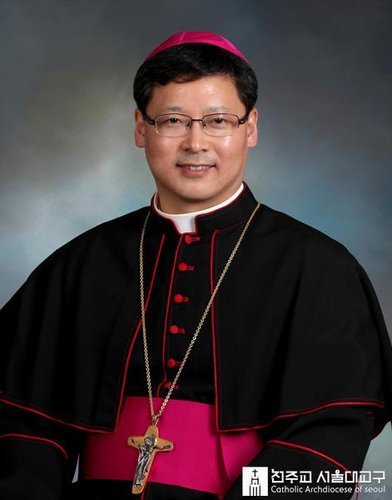 Chung’s installation ceremony and mass will be held at Myeongdong Cathedral in central Seoul at 2 p.m., according to the Archdiocese of Seoul.

During the ceremony, the 60-year-old Archbishop will accept the pastoral staff symbolizing the authority of the pastoral charge of his predecessor Yeom and will take their place in the cathedra, or episcopal chair.

Chung will then take the oath of obedience and exchange greetings of peace with representatives of the clergy, monks and nuns and laity.

After Mass, there will also be a separate congratulatory ceremony for the new Archbishop of Seoul, where Apostolic Nuncio to South Korea Alfred Xuereb, Archbishop Mathias Lee Yong-hoon, president of the Korean Conference of Catholic Bishops, and the South Korean President Moon Jae-in will deliver congratulatory messages.

Originally from Daegu, some 300 kilometers southeast of Seoul, Chung studied chemical engineering at Seoul National University and, after graduating in 1984, enrolled at Korea Catholic University. .

Two years later, Chung entered the Discalced Carmelite Order. He was ordained a priest in 1992 and obtained a master’s degree in sacred scriptures from the Pontifical Biblical Institute in Rome in 2004.

Chung then served as General Definitor of the Discalced Carmelite Order in Rome for the Far East and Oceania, then became Auxiliary Bishop of Seoul in 2013.

After being consecrated bishop in 2014, Chung served as chair of the Korean Catholic Bishops Conference Youth Ministry Committee.

In October, Pope Francis appointed him the 14th Archbishop of Seoul and Apostolic Administrator of Pyongyang as Yeom offered his resignation in 2018, the year he turned 75. (Yonhap)

Jacqueline Perry-Higgs’ 21EDD: ‘I have a desire to make an impact on teaching and learning by supporting teachers and administrators as they work diligently to change the lives of children’