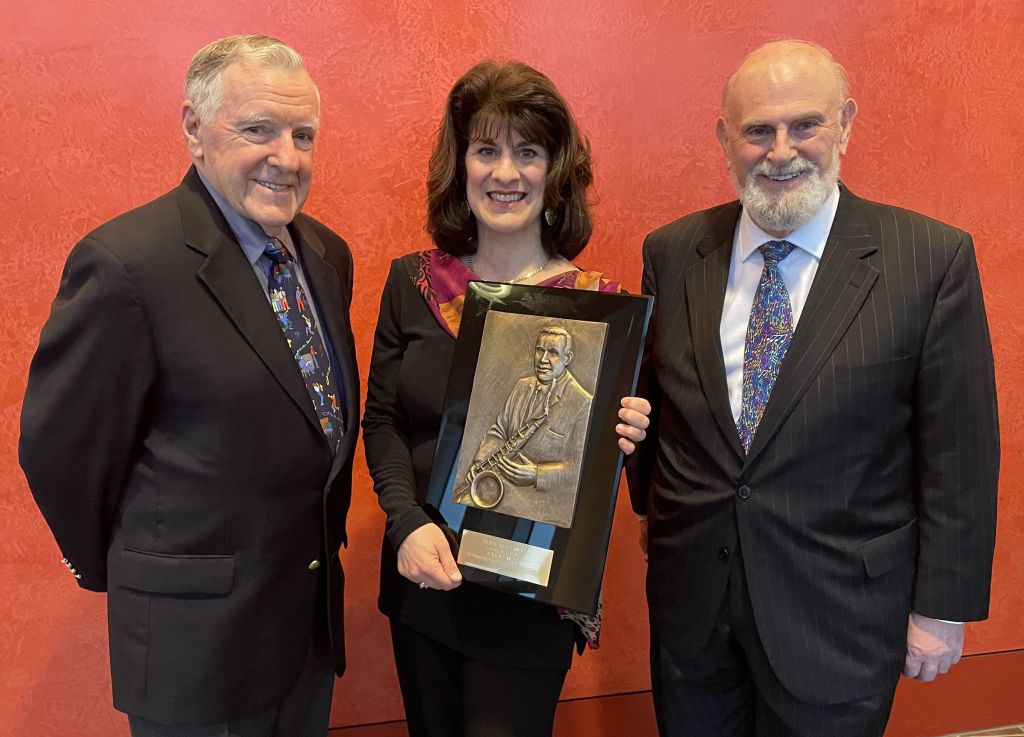 The annual award is sponsored by the Jerlyn Foundation and pays tribute to well-known Reading jazz saxophonist Frank Scott. Scott died in 1995 and the award has been given to notable musicians since 2005.

Damore is honored to be in their company.

“I was just floored,” Damore said of her reaction to the news. “I’m not strictly jazz, so I didn’t expect that. I think it’s a great honour.”

Damore has been active in music all her life since singing to school as a child. As a young woman she focused on musical theatre, but as she got older she was drawn to other styles including opera, pop and jazz, and found she could also tune. his voice to these styles.

“I discovered that during Berks Jazz Fest I could incorporate show tunes and jazz and the Great American Song Book,” she said. “I have many interests. I started to study jazz more, and even with the improvised part, there is always a structure behind it. I started to really notice this structure and use it. It’s a great joy to learn the cogs and bolts and learn what goes on behind the scenes.

Finding success in many different musical styles allowed Damore to pursue and expand his career. Five years ago, she opened her own singing studio and continues to share her love of music with children through various programs.

She is particularly proud of the series of operas for young people produced by the Yocum Institute for Arts Education in collaboration with the Reading Civic Theater and the Berks Opera Company. Shows have included “The Fisherman and His Wife” and “The Bear Prince”.

Damore continues to seek new and exciting ways to use her artistry and ability to teach. She is currently working on a concert for Oheb Sholom which will feature Jewish composers. She is also working on a special piece composed by Lori Laitman from poems by children killed in the Holocaust.

“I love researching and finding new things,” Damore said. “And when I heard that, it was just mesmerizing. It had to be presented.”

Upcoming performances will be announced on her website, www.mariadamore.com.

Community theater group 1st Street Players will honor the legacy of one of their own with a production of “Dear Edwina Jr.” being staged May 12-22 at their performance venue at 301 E. First St., Birdsboro.

A heartwarming and humorous tale of self-acceptance, the musical centers on Edwina Spoonapple, a brave advice giver who wants to earn her place in the Kalamazoo Advice-a-palooza. When a talent scout comes to her hometown, Edwina plans a special edition of “The Dear Edwina Show”, enlisting family and friends to wow the talent scout and finally step out of the shadow of her brothers and sisters. talented sisters.

A portion of the proceeds from the show will fund educational programs at 1st Street and enable more inclusive programming, in honor of Cunningham.

Genesius Theater is staging the award-winning musical “Dogfight” from April 22 through May 1 in its performance hall at 153 N. 10th St.

Romantic yet heartbreaking, “Dogfight” tells the story of three Marines on a boys’ night before their deployment to Vietnam. It was then that the Corp. Eddie Birdlace meets Rose, a waitress he uses in a cruel bet he makes with his fellow recruits. But Rose turns the game around and teaches Eddie a lesson in love and compassion.

Genesius art director LJ Fecho, who is directing this production, explained that “Dogfight” is like an onion in that it has many layers.

“At first glance, you’re just caught up in the awkwardly innocent romantic pre-Vietnamese story; however, as you go deeper and these layers fall to the side, you find so much more,” he said. “The story not only reflects the human condition at its worst and best, but serves as a metaphor for the unraveling of an era that began with so much hope and promise, and ended in turmoil. , fear and hatred.”

Daniel Graf stars as Eddie, a soldier who tries to retain his humanity after spending more time with Rose, played by Kelly Kantner, whose stage credits include playing Minnie Fay in “Hello Dolly” at the Theater by the Sea in Rhode Island, working alongside Tony Award-winning actress Cady Huffman.

Kantner said she felt a kinship with Rose.

“She seeks to find the good in every situation,” Kantner said. “Also, like Rose, I’ve been hurt, heartbroken, and bruised by other people’s words or other people’s actions. Moments of being bullied as a kid for being a plus-size girl , at a time that was completely life changing and how she/I chose to move forward, and even be grateful for this moment.

Financial advisor and Berks County native Judson Meinhart has released “Golfer’s Guide to Money,” a book that attempts to break away from the daunting nature of personal finance literature and make it a more enjoyable experience.

“A lot of talk about personal finance is boring at best and intimidating at worst,” he said. “I wanted to change that.”

Meinhart drew on his experience advising investors through volatile markets in 2020 as inspiration for the book.

The book’s nine chapters juxtapose the game of golf with the fundamentals of personal finance. Examples include:

• How Bubba Watson’s miraculous shot at the 2006 Masters is a prime example of managing risk in your financial life.

• Why Augusta National’s 12th hole, called “the toughest hole in golf tournaments,” serves as a perfect model for an investment strategy.

• What Jack Nicklaus’ career can tell us about when you retire and the stock market.

A free downloadable chapter of the book is available online at golfersguidetomoney.com.

Meinhart is a senior financial advisor at Parsec Financial, a wealth management firm with six offices in North Carolina.

ReadingFilm, in conjunction with the Jewish Reading Federation/Berks, will premiere the documentary “They Survived Together” on April 21 at 7 p.m. at the Boscov Film Theater at the GoggleWorks Center for the Arts, 201 Washington St.

A meeting with the filmmaker, John Rokosny, will precede the screening at 6 p.m., and a panel discussion and Q&A will follow the screening.

“They Survived Together” recounts the escape of a family from the Krakow ghetto in Poland during World War II. It is a moving portrait of courage, faith and endurance. The film also serves as a chilling reminder of the impact of war on families, with a message that still resonates today.

The film is showing at special screenings nationwide, was recently picked up by PBS, and premiered at ReadingFilmFEST 2021.

For more information on the film, visit www.theysurvivedtogetherfilm.com. Tickets for the screening are available at goggleworks.org or at the door.