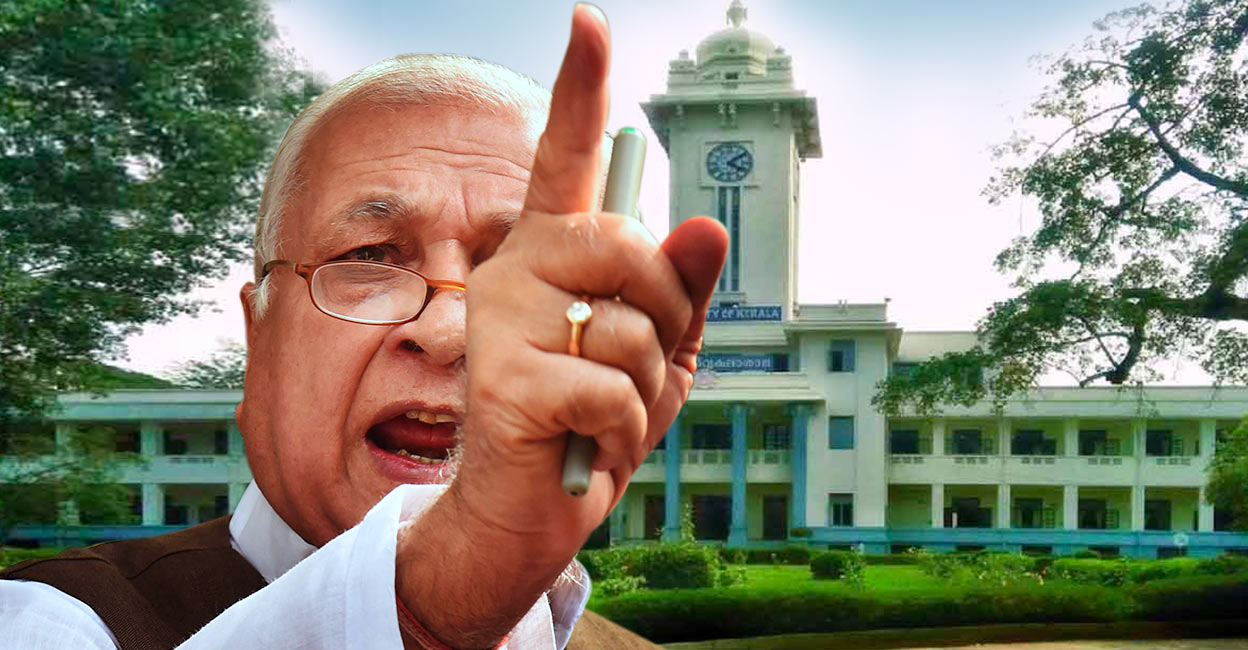 Kerala varsities, place of political games, these cases are just the tip of the iceberg

Kollam: In his letter to the Chief Minister of Kerala asking him to assume the responsibilities of Chancellor, Governor Arif Mohammed Khan pointed out excessive political interference in universities. No university in Kerala is immune to the machinations of political and labor leaders. What is happening at Sree Narayana Open University in Kollam is a perfect illustration of what plagues higher education institutions in the state.

Vice Chancellor and Pro Vice Chancellor of Kollam Open University Sree Narayana Guru have been working without pay since its establishment in October 2020. The governor wrote three letters urging the government to pay their salaries.

The governor became acerbic after insensitive officials at the Department of Higher Education refused the salaries of more than 40 central office workers at universities.

The university was established by the 45th ordinance of 2020, apparently promulgated in preparation for the 2021 Assembly polls. The ardor shown in the promulgation of the ordinance was not shown in the subsequent course of the university, raising suspicions that the institution could start its courses even two years after its establishment.

Even though the university has claimed recognition from the University Grants Commission (UGC) under Sections 2 (F) and 22 of the UGC Act, the state government has so far failed to provide a convincing reason. not to start the course to the governor. .

Several hurdles must be overcome in order to obtain the recognition of five years from the UGC for the start of the courses. The university should have at least 60 percent of teachers (dedicated professors) to prepare the course material. The faculty has not yet been appointed, also on a temporary basis.

Meanwhile, the university recruited faculty members from other universities and retired teachers to form academic committees, which completed the finalization of the programs.

University officials, however, have expressed their helplessness saying the institution cannot move forward without course materials.

Previously, permanent appointments were expected to be made to teaching and non-teaching positions. However, the government and party opted for temporary appointments, allegedly to make it easier to hire relatives.

The plan was for the Union to directly appoint people to 118 teaching and non-teaching positions. However, the plan did not take off following allegations that such a move would facilitate the stolen dates. The allegations caught the government off guard.

In an effort to save its skin, the government later announced that appointments to non-teaching positions would be made through the Employment Exchange and that the university would appoint teachers directly. However, the party has reportedly prepared a list of teachers to be appointed on a temporary basis.

An endless probe in sight

Another example that exposes rot is a late investigation into the appointment of Dr R Chandrababu as vice-chancellor of the Agricultural University of Kerala.

For the past five months, Agricultural Production Commissioner Ishita Roy has investigated the appointment following complaints of nepotism when Dr Chandrababu, a resident of Tamil Nadu, submitted a padded biodata during his candidacy for the job.

The plaintiffs said Dr Chandrababu was appointed without careful scrutiny of his personal data and at the request of a national leader of a prominent political party. It was alleged that a senior official in the first Pinarayi government was also behind the appointment.

The Ministry of Agriculture did not take seriously documents proving the publication of five research articles in journals.

Dr Chandrababu had mentioned these documents in his biodata submitted to the Governor.

It was also alleged that he was appointed without providing proof of his basic and additional qualifications and research experience to the governor and the three-member search committee.

Meanwhile, the agriculture ministry said the list of candidates who applied for the post of vice-chancellor in 2017 was not available. By UGC standards, the search committee must submit a shortlist of three to five candidates to the governor. The governor, however, was given only one name.

The complainants also alleged that the authorities were sabotaging the normal procedure for rejecting applications made without submitting eligibility documents.


Renewal of the mandate of Kannur University VC

The reappointment of Professor Gopinath Ravindran as Vice-Chancellor of Kannur University is the latest episode in political intervention in the higher education sector.

In response to a request filed under the Right to Information Act (RTI), the Ministry of Higher Education said the government of Kerala had not sent a letter to the governor, recommending the renewal of the Professor Ravindran.

The governor’s outburst against political interference has highlighted the lobbying for the renewal. The Minister of Higher Education, R Bindu, is said to have recommended Professor Ravindran’s name. His private secretary has personally met with the governor in this regard.

The higher education department, however, in its response from RTI to the Save University campaign committee, washed its hands, expressing ignorance on the matter.


In his defense, Professor Gopinath Ravindran, Vice-Chancellor of Kannur University, said: â€œThe governor appointed me. You should ask those who appointed me if it was about politics in my appointment. While reappointment is new in Kerala, it is common in other states. Naming people over the age of 60 is nothing new either. I did not consider resigning. No political appointments were made at the university while I was vice-chancellor. “

The state of play at Mahatma Gandhi University

A plastic “someone” tag had been attached to two movable traffic cones which blocked part of the main road inside Mahatma Gandhi University. Unloaded building materials prevented the use of the parallel track.

A flag that the Federation of Indian Students (IFC) hoisted to protest the violation of the right to run was flown around the construction site.

With both lanes closed, students, staff and visitors to the university were forced to take an alternate route to get to the university. University officials – responsible for the smooth running of the educational institution – claimed the students had blocked the way using traffic cones and a plastic tag. Yet no one had the courage to clear the road and keep traffic flowing – until the media reported the incident and “someone” cleared the roadblock.


The vice-chancellor, Dr Sabu Thomas, had previously tried to find a solution. SFI executives arrived an hour late for a meeting he had called to discuss the issue. Another meeting also held by CPM leader and Union member Reji Zachariah was also unsuccessful.

The two traffic cones and the plastic label blocking the way were just a slice of excessive political interference in universities. Even student leaders escape the control of universities. Political leaders and leaders of teachers’ organizations are actively involved in all matters, including appointments and grading.

What pissed off the governor

There are, however, several other issues that put Raj Bhavan at odds with the government. They include:

â€¢ Interest of the PMO, no eligibility, criterion for appointment of the vice-chancellor

â€¢ Presentation of grades to students of Mahatma Gandhi University and Kerala Technical University through adalats when KT Jaleel was minister.

â€¢ The Governor reserves the right to revoke diplomas awarded after giving marks. MG University, however, revoked the certificates. The students went to court and received a favorable order. The university approved the court order.

â€¢ Controversies over the appointments of the wives of CPM leaders as teachers at various universities.

The stalemate between the Governor of Kerala and the government continues; no de-escalation sign yet