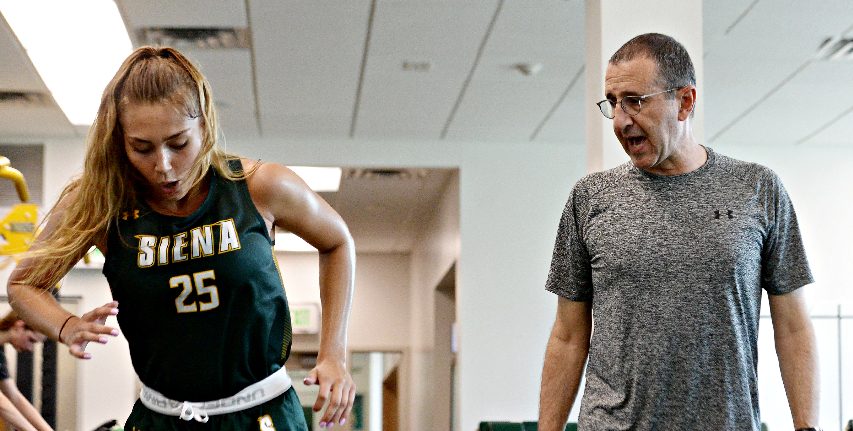 LOUDONVILLE – At his introductory press conference three months ago, Jim Jabir – returning for a second tour as the head coach of women’s basketball from Siena – said that one of his goals was to beat Marist, a regular MAAC powerhouse and a stumbling block for the Saints.

The next day he received a call from Marist Head Coach Brian Giorgis.

“I guess he heard,” Jabir said Wednesday after one of his team’s summer training sessions. “I didn’t know what else he expected me to say – you know, like, we’re going to finish second behind him?”

Jabir delivered that line with a good-humored tone, and the new Saints head coach did so after declaring another impressive goal for his club, which is for the Saints to play faster than any other team in the country.

It’s a summer staple for coaches, especially those new to a program, to promise to play in a faster style. But for Jabir, who began his decades-long Division I head coach career in Siena from 1987 to 1990, Wednesday’s promise was part of a developing model of setting impressive goals, a tactic intended to establish a culture within the program that will enable it to win the MAAC Championships.

So, Jabir wants the Saints to play fast – and that means their goal should be to play faster than anyone, not just most teams.

â€œWe’re going to try,â€ said Jabir, who was most recently a Florida Atlantic coach. “I mean, that’s the point.”

In Siena, Jabir returns to a program that has struggled to win with consistency since winning six MAAC regular season championships in the seven seasons that ended in 2004. The tenure of Ali Jaques, Jabir’s predecessor, ended after three consecutive losses. seasons, and Siena has produced just two winning seasons in its last 17.

So a key part of the Saints’ summer training sessions, which began last week, is setting expectations at a high level – and equipping Saints to meet them.

â€œThe ability to successfully complete something is important to teach and learn, so we try to teach them how to win because. . . we never got over the bump, and I think we have enough talent this year to do it, â€said Jabir.

At the very least, the Saints have enough players to do it. Between returning Siena players, rookies and transfers, Jabir’s roster includes 16 players – and seven of those players are either seniors or graduate students.

“It’s a very great team, and I’m glad everyone is here because I love being with them,” said Jabir, whose coaching resume includes an Elite Eight appearance since his stint at Dayton. â€œIt kind of rejuvenated me. The best part of my day is being with them. They were really receptive, really open and very, very easy to coach – so it was a lot of fun. “

Valencia Fontenelle-Posson, a freshman who previously played at Guilderland High School, said she was looking forward to starting summer training with the Saints.

â€œAnd it didn’t disappoint,â€ Fontenelle-Posson said. â€œThe workouts are excellent. We all push each other, and that’s what I expected.

“We have to focus on the little things and we have to be there for each other,” Fontenelle-Posson said. “We all have to play as a team and work hard every second that we are on the pitch so that we can perform in the future.”

â€œWe need everyone to join in and be what we are in Siena,â€ said senior Margo Peterson.

At this point, Jabir said his band had “been wonderful” in the way he had adapted to his style. He said the players returning from the program â€œhave been really open to anything; we had some really tough conversations and honest conversations, and they were so convinced, â€while the new players on his team were eager to learn. Siena is coming off a 4-9 campaign and lost its top scorer to Isis Young, but Jabir has said he doesn’t want to limit what his schedule can achieve in the 2021-22 season.

â€œI think we have enough players to win a few games and definitely improve,â€ said Jabir, â€œand hopefully we can win a championship. We’re really going to try.

More from The Daily Gazette: