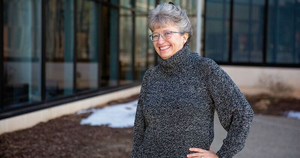 Melinda Duncan, professor of biological sciences at the University of Delaware, has been named associate vice president for research at UD and director of the Delaware IDeA Network of Biomedical Research Excellence (INBRE).

“Dr. Duncan has a reputation for excellence in research, higher education, and diversity, equity, and inclusion. I look forward to our work on strategic projects that support the growth of Delaware’s research and its positive impact on Delawareans,” said Charlie Riordan, vice president for research, scholarship, and innovation. “I also thank Steven Stanhope, professor of kinesiology and applied physiology , for the tremendous contribution he has made in these roles over the past eight years. Melinda brings great expertise and energy to continue this momentum.

Duncan, who grew up in nearby Cecil County, Maryland, has been involved in research since she was an undergrad. But her early years in college weren’t easy, and she’s committed to breaking down whatever barriers she can for others.

“I was the first in my family to go to college, and I really didn’t know what to expect — I didn’t know how to play the game,” she said. “I really struggled at first.”

Fortunately, one of Duncan’s professors was impressed with her lab work and encouraged her to apply for an undergraduate research internship. The experience transformed her academically. She would eventually contribute to new discoveries, co-authoring four impressive research publications as an undergraduate student. She continued to excel in her studies and then moved on, pursuing her doctorate. and become a teacher.

Now, as Director of the Delaware INBRE Program, she will lead a major initiative to grow the state’s biomedical workforce and infrastructure, with the ultimate goal of improving the health of Delawareans. And she and her collaborators want any student interested in biomedical research – a well-paying field – to have the opportunity to make a career out of it.

Biomedical research, as Duncan explains, encompasses a wide range of work, from exploring the basic mechanisms of how life works, such as the binding of the COVID-19 spike protein to the ACE2 protein that allows the virus to infect cells, orchestrating large, disease-specific community health initiatives like cancer.

The associated professions are numerous, from biotechnologists working on the development of biopharmaceutical drugs, to microbiologists and epidemiologists, data scientists, laboratory managers and manufacturers of artificial limbs and organs, to name a few.

Delaware is the perfect place to establish such a career, according to Life Sciences in Delaware, a 2021 report published by the Delaware Prosperity Partnership and the Delaware Bioscience Association. Biosciences are a key economic driver in Delaware — generating $2 billion in gross domestic product (GDP) annually, with 11,000 people employed in a variety of sectors, from medical R&D to agricultural and industrial biosciences — and the state is ready for much more growth, the report mentioned.

Delaware INBRE, an initiative funded by the NIH through its Institutional Development Awards (IDeA) program and the state of Delaware, plays an important role in maintaining that momentum, according to Duncan. The network collaborates to fund shared research facilities, to seed promising ideas proposed by early-career researchers, and to provide undergraduate students with internships and other opportunities to do hands-on research.

Since Delaware INBRE’s launch in 2001, the program has provided research experiences for 869 undergraduate students, with more than a third of those students going on to graduate school. Nearly one-third of academics are now employed in scientific or health-related fields in Delaware.

The network’s impact on early career researchers has also been significant, leading to dozens of proposals submitted for funding competitions to the National Institutes of Health and other federal agencies over the years, culminating in the awarding of 393 research grants until 2021.

Duncan’s own research focuses on the eye, specifically how the ocular lens responds to injury and how this can limit cataract surgery outcomes. Her work has been continuously funded by the NIH since 1998, and she attributes her successful start to the seed funding she received through the first ever NIH IDeA grant to a Delaware institution (Professor Daniel Simmons of the Department of Science biology, now retired, as Principal Investigator) who funded the facilities, equipment, and people needed to expand UD’s research into molecular and structural biology in the late 1990s.

This award, which also made initial investments in infrastructure, such as high-end microscopes and the experts needed to operate them, led to today’s world-class bio-imaging facility, a center basic research at UD that helps bioscience researchers in Delaware and far beyond their studies. And this is just one example at UD alone.

“We could not have gotten to where we are today without this initial support from the NIH,” Duncan said.

Duncan sees INBRE as a statewide force to bring all research and teaching units together to help build a science ecosystem that is poised to solve the toughest problems in the world. today, while simultaneously expanding opportunities for all.

“What I’ve always enjoyed most is helping others succeed,” said Duncan, who led the graduate program in the Department of Biological Sciences for 11 years. “And that’s really what Delaware INBRE is all about – seeing if you can break through the barriers to success, especially for people who are the first generation in their families to go to college, who are from an under- represented or who have serious financial constraints. It’s really great work to be able to break down barriers for people with big ideas. »