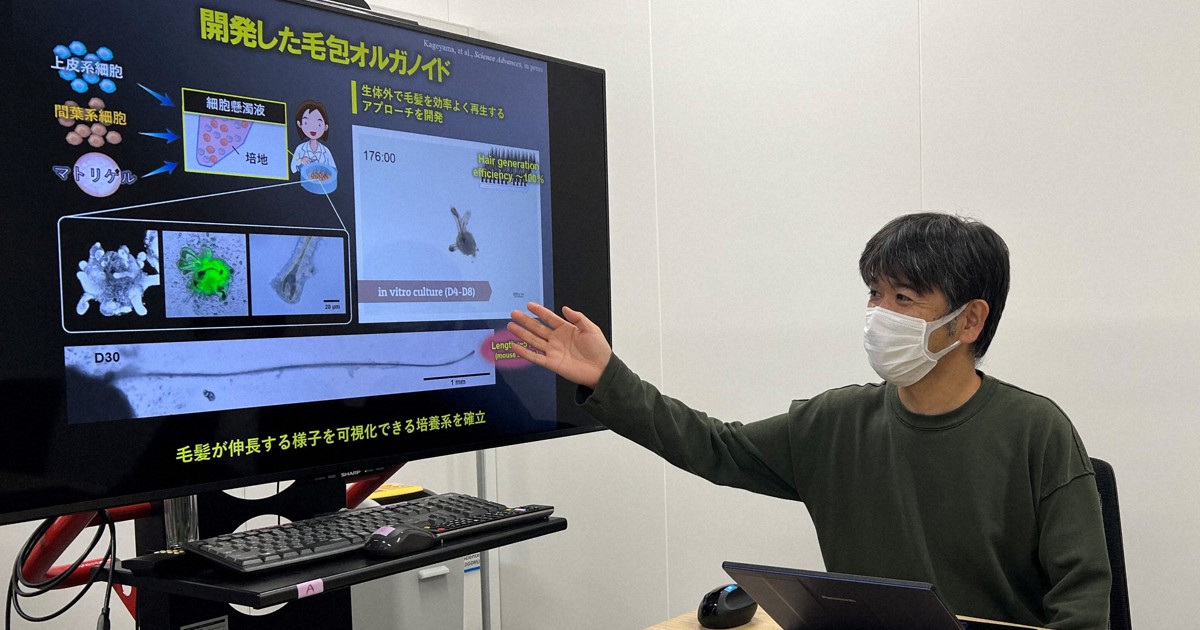 YOKOHAMA — Researchers from institutes such as Yokohama National University have made a leap forward in the science of hair restoration by cultivating fully mature hair follicles in the laboratory.

In their research, clumps of organ-like cells called organoids were taken from under the skin of mice and used to grow hair on a petri dish. Professor Junji Fukuda, who heads the Bio-Microsystems Laboratory at Yokohama National University, said: “This is the first time that hair shafts of a certain length, including follicles, have been cultured in a lab with very consistent results.” The research was published in the American journal Science Advances on October 21, 2022.

The researchers took two types of embryonic cells that would grow into black mouse fetal hair follicles and bathed them in a culture containing a protein used to bind the cells together. On the fourth day, the hair follicle organoids appeared almost 100% of the time. Within six to 10 days new hair growth was detected. By day 23, the hairs had reached about 3 millimeters in length.

The researchers transplanted the organoids into the skin of hairless mice. Over the course of a year, the researchers observed a complete cycle of hair generation from the follicles, through the growth and loss of hair strands from the same follicle.

The team said it could lead to new treatments for conditions such as hair loss if their experiment is successfully carried out using human cells. However, they cautioned that at this point there are challenges with performing the same type of follicle culture using human cells. According to Fukuda, a research team in the United States successfully used human-induced pluripotent stem cells to grow hair, then transplanted human skin with hair follicles into mice. However, as there have been issues regarding the safety and feasibility of transplanting such cells into humans, it is apparently thought to be difficult to use the technique in a medical setting.

The Riken Research Institute and a regenerative medicine venture capital firm developed the technology to mass-produce hair follicle stem cells in 2018. They aimed to undertake clinical research, transplant the follicles into the people’s scalps, but factors such as the coronavirus pandemic have put their work on hold.

(Japanese original by In Tanaka, Department of Science and Environmental News)

Graduate Student Gets Money To Watch Moose On Blackfeet Reservation