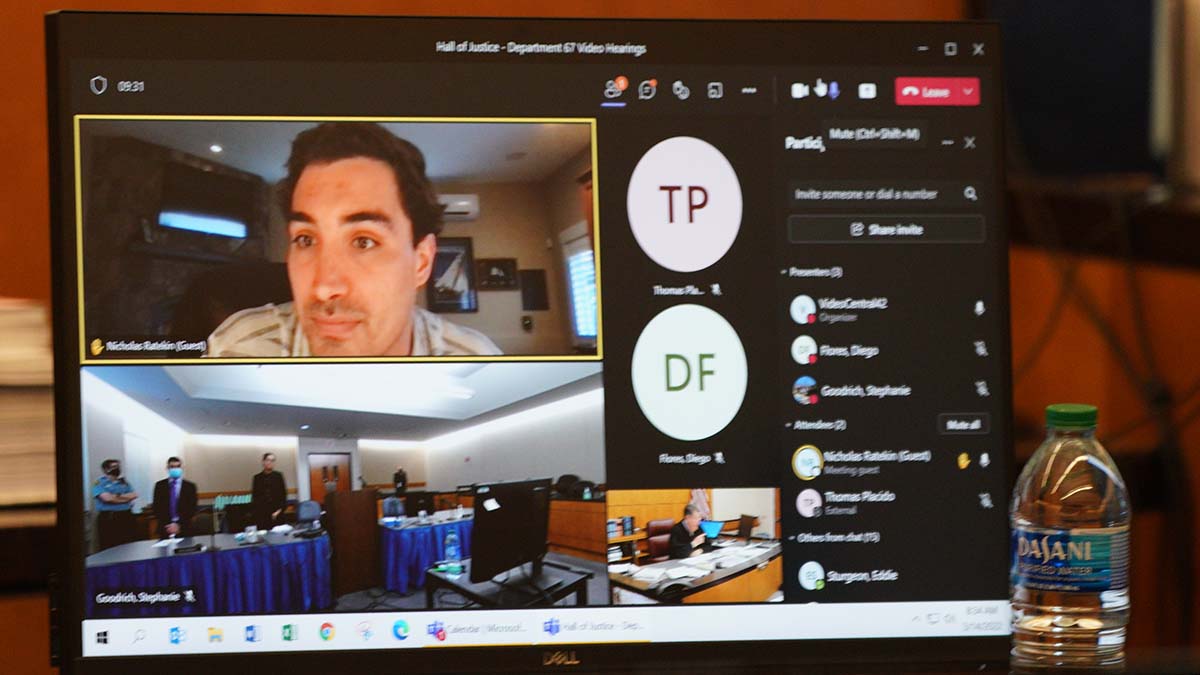 Last November, former San Diegan Nick Ratekin filed a report with the Clark County Sheriff’s Department in Washington state claiming he was being taped 24/7 at his home – the video and the audio being “leaked” on social media.

“These recordings include my bedroom, bathroom, living room, kitchen, family room, and home office,” wrote Ratekin, who is suing the University of San Diego for breach of contract after being fired from his job. Masters of Education program and kicked out of student teaching jobs.

He said the recordings ranged from “everyday activities within the confines of my home, such as family conversations, to all telephone conversations, emails and other private communications”.

A day after Ratekin filed his report, Marek wrote his own – noting that Ratekin accused the USD of what he called “persistent surveillance”.

But the 27-year-old Brush Prairie, Wash., resident was “unable to explain why or provide any other information to determine if a crime is occurring, to prove that these acts are occurring or if any evidence is there,” Marek wrote. Nov. 8, according to records obtained by The Times of San Diego.

According to court records, he says the USD is circulating a “defamatory record”, part of a “chain of harassment” that prevents him from getting a job in education.

Two weeks later, after filing a FOIA request, he issued a civil subpoena to Nathan Richmond of the US Department of Transportation – whom he misnamed the Secretary of Transportation. (That’s Pete Buttigieg. Richmond is the deputy assistant inspector general.)

The DOT subpoena was for “widespread surveillance, social media harassment, and technological interference in the ‘drone surveillance’ of plaintiff Nicholas Christian Ratekin.”

(The Department of Transportation’s Office of the Inspector General in mid-February responded to his FOIA requests, saying he had “no records responding to your request,” but suggesting he write to Federal Aviation. Administration” for drone registrations.)

And on March 10, Ratekin — still acting as his own attorney — issued a subpoena to AT&T CEO John T. Stankey regarding “text messages, iMessages, phone calls, app data (Snapchat), cellular data or any other form of digital communication from Ratekin”. the data stored, kept or managed by AT&T is published on social networks, in particular Facebook (META), with the aim of humiliating and defaming it publicly”.

All of those claims were heard March 14 before Judge Eddie Sturgeon in San Diego Superior Court, where the USD won its motion to restrain Ratekin from issuing incessant subpoenas.

“The Court advises counsel and plaintiff that it will not permit any further discovery,” Sturgeon wrote. “Any future claims will be made in Court by ex-parte.”

On Thursday, the self-proclaimed Donald Trump fan will ask Sturgeon for clarification on the restraining orders.

He wants Sturgeon to define the “scope” and “parameters” of his civil subpoenas. Ratekin is aiming to stop the USD from sending the “defamatory dossier” to Concordia University in Irvine, a private Lutheran school where he says he was admitted to pursue a master’s degree in coaching and exercise science.

In court filings, Ratelin says he faced harassment from National University over sending his USD student records to NU ‘in violation’ of his life rights private of FERPA students.

(“A FERPA complaint was filed with the United States Department of Education in response to said violation circa January 2022 with a report finalized pending completion of the investigation,” Ratekin wrote.)

Despite his excellent academic record, he says, he struggled to find a job through the EdJoin platform. He sought positions in a dozen counties, including San Diego.

Ratekin says he is seeking a change of venue for his November 4, 2022 trial.

He wants him moved to Riverside County” given the defamation and its hyper-focus in the Greater San Diego area due to the “viral nature” of defaming Facebook as a means of retaliation and intimidation against the plaintiff intended to improperly influence or “poison” potential jury pools.

Ratekin did not respond to requests from The Times of San Diego for examples of defamatory social media.

At the same hearing on Thursday, Ratekin also sought court approval for a series of deposition requests.

He wants to interview SHU and National University officials as well as the head of public schools Thurmond.

He says he wants to know why the California Department of Education closed Thrive Charter School in June 2019 after Ratekin taught there.

“Plaintiff Nicholas Christian Ratekin understands from teaching at Thrive that the school has failed the Basic Learning Outcomes, California State Graduation Rate Criteria, and California State Literacy Criteria. the State of California,” Ratekin wrote in a May 9 filing.

“This disregard for basic California state education standards has occurred simultaneously with the indoctrination of students with ‘left-wing’ ideology such as ‘protests’ and reading materials such as “Malcom X” which contained both expletive and racist slurs.”