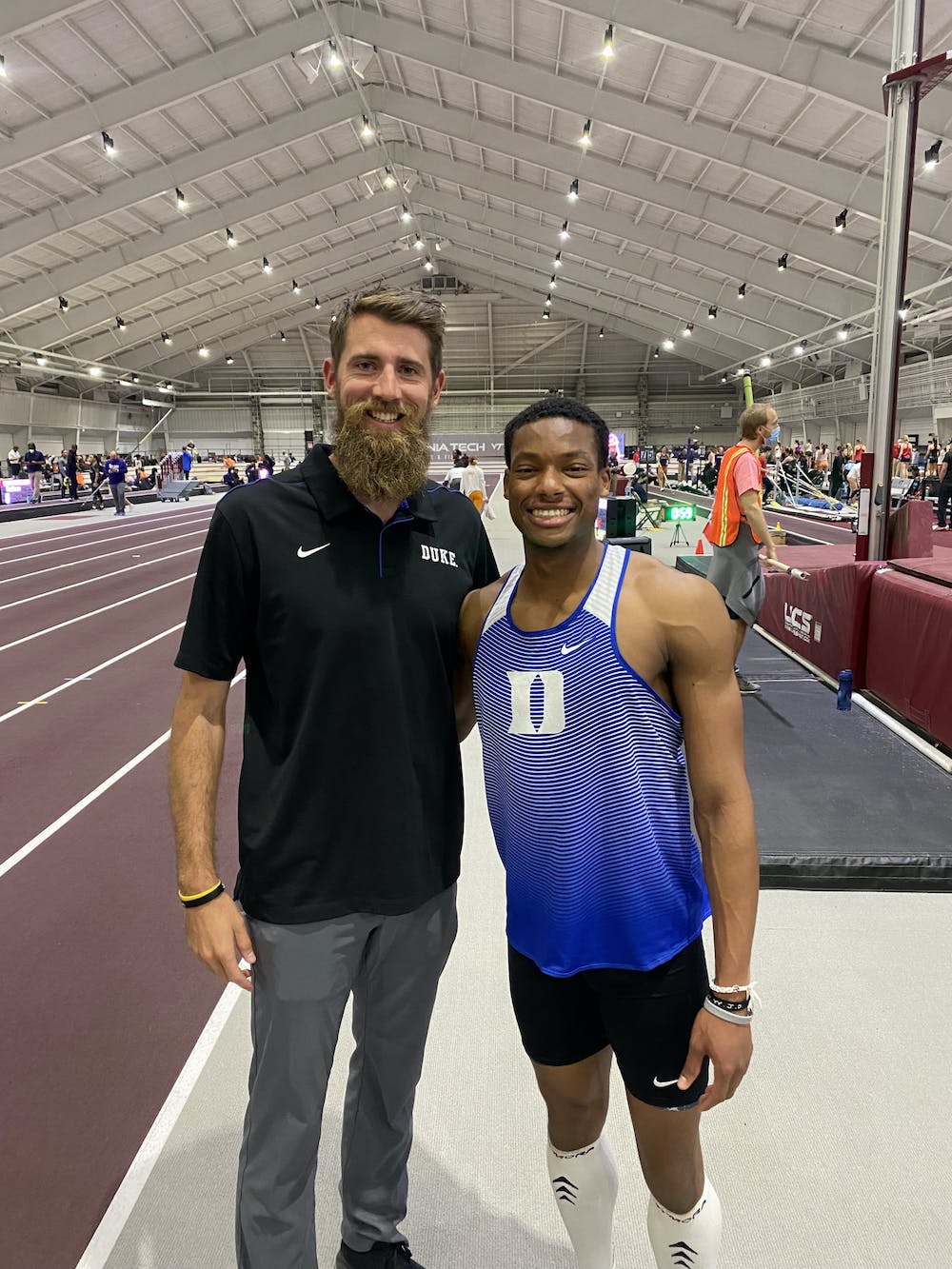 Now the program’s goal is to build on this success. And last Friday and Saturday at the Virginia Tech Invitational, it’s safe to say Duke did just that.

While it had been more than a month since the Blue Devils first met the season indoors on December 4-5, with the winter break taking up much of that time, director of athletics Shawn Wilbourn said that the team had performed well in every group of events and established a solid foundation for the year ahead.

“We are a much younger team than we were last year. But last year’s success set the bar high and changed the mentality of our women’s team, in particular,” said Wilbourn. “And the level of talent that we have now, we’re going to be chasing an ACC championship every year I believe, and this year will be no different.

“On the men’s side, we are building the men’s program. Our goal is to be in the top five at ACC indoors and maybe top four outdoors. The women motivated the men and the men are performing at an all time high.

Several individuals and relay teams impressed on both days of the competition, but perhaps the highlight was Donovan Spearman’s record-breaking 60-meter sprint. The former Dartmouth sprinter and All-Ivy League Second Team performer in the event clocked 6.71 seconds on Friday, breaking Randy Jones’ Blue Devil record of 6.74 that had stood for 30 years.

“He’s an extreme talent,” Wilbourn said of Spearman. “And we expect him to do great things throughout the indoor and outdoor season, so really excited for him.”

On the women’s side, graduate student Lauren Hoffman stood out in the 500-meter and 200-meter races, with her time of 1:11.97 in the former, falling just 0.1 seconds off the record for the ‘school. Hoffman is looking to build on an incredibly successful 2021 campaign in which she won ACC silver in the outdoor 400 meters, earning second-team All-America accolades.

One name that remained relatively quiet throughout the weekend, at least compared to its usual dominance, was graduate student Erin Marsh. But Wilbourn said that with Marsh, who won bronze in the pentathlon at the NCAA Indoor Championships last year, the training plan is a little different than the rest of the team.

“We expect her to compete late in the summer, so we’re still training pretty hard with her,” Wilbourn said. “Her trajectory is a little different… We think she has a shot at winning the NCAA and potentially making the World Championships this summer. So she’s just training a little differently, and she’s training a little harder right now. So the performances aren’t going to be there soon, because she’s a bit tired.

Marsh still set a personal best in the shot put over the weekend, with Wilbourn saying she “looks amazing” in terms of progress through the winter so far.

The competition ended on Saturday night with Duke taking two first places in the final events of the weekend: the men’s and women’s 4×400 meters relays. Graduate students Miles Mingo and Alex Schwedt along with sophomores Alejandro Rodriguez and Job Trahan rounded out the men’s team, taking first place with a time of 3:14.86 – Wilbourn said they were a group who could challenge the school record of 3:11:15 set last season.

Get overtime, all Duke sports

Sign up for our weekly editorially curated newsletter. Cancel anytime.

The women’s 4×400 team is a bit more of an open case right now. Duke won gold at the ACC Outdoor Championships and placed seventh in the NCAA Outdoors event last season, but has since lost three of the four members of that relay so far. at graduation (Hoffman is the only one to return). So Wilbourn has decided to split the eight women vying for those four spots into two teams taking part in last weekend’s encounter to see what he has to work with.

In the end, Hoffman, junior Jenna Crean, rookie Abby Geiser and sophomore Hailey Williams took first place in the event with a time of 3:43.21, while junior Carly King, senior Nikki Merritt and rookie Megan McGinnis and Chyler Turner placed second. with a time of 3:45.95.

“We kind of took the eight girls that are in consideration for the 4×400 and kind of separated them and ran two teams, and they both raced really well, actually raced against each other because we were in ahead of the other teams. away,” Wilbourn said. “And now we’ve kind of raised the bar a little bit for the 4×400 teams – we think maybe we’ll have a team as talented as the one we had last year, so really excited.”

Duke returns to Blacksburg, Va. this weekend for the Hokie Invitational as he continues to prepare for the ACC Indoor Championships in late February.