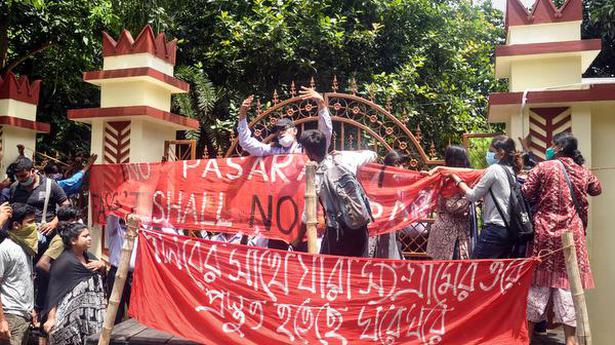 “Educational establishments are misused as breeding grounds by political parties”

On September 15, the Calcutta High Court overturned the rusticity of three students from Visva-Bharati who were punished for participating in a demonstration in January 2020, and severely criticized “foreigners and political parties” for doing so. she called the misuse of educational institutions. .

The three students – Somnath Sow and Falguni Pan, in economics; and Rupa Chakraborty of Hindustani classical music – were expelled on 23 August for three years for “serious indiscipline and misconduct”, but their ban was suspended by the court last week. The September 15 order would be seen as a victory for them and for critics of the Vice-Chancellor, Professor Bidyut Chakrabarty.

â€œâ€¦ In the interest and for the ends of justice, exceptionally, without setting a precedent, the ordinances of hardiness are canceled. This order is made in the very particular facts and circumstances of the case on the commitment of the three students that there will henceforth be peace and order in the University, â€said Judge Rajasekhar Mantha in his order. .

He said the three students could not have caused chaos at the university without the “support of influential foreigners”. â€œIt is sad to see that the noble cause of education has been slaughtered on the altar of politics and a political brawl. Educational institutions are being misused as breeding ground by political parties, â€added Judge Mantha.

The judge said the three students appeared to have been used as a front by some special interests to cripple the University. â€œThe whole lot of students at the University suffered from it. Foreigners and political parties have absolutely no role to play in the internal affairs of an educational institution, â€he said.

On the suspension of teaching and non-teaching staff, the judge said: â€œSaid suspension orders will be reviewed with regard to the statute of the university within 15 days from the date. The university is expected to take a very pragmatic view on this matter.

Judge Mantha called on the vice-chancellor and management to adopt a “more user-friendly, accessible and inclusive approach” in dealing with university affairs and to avoid “unnecessary confrontations”. He also withdrew his previous order that armed personnel from the Santiniketan Police Station guard the VC, saying the arrangement was no longer necessary.