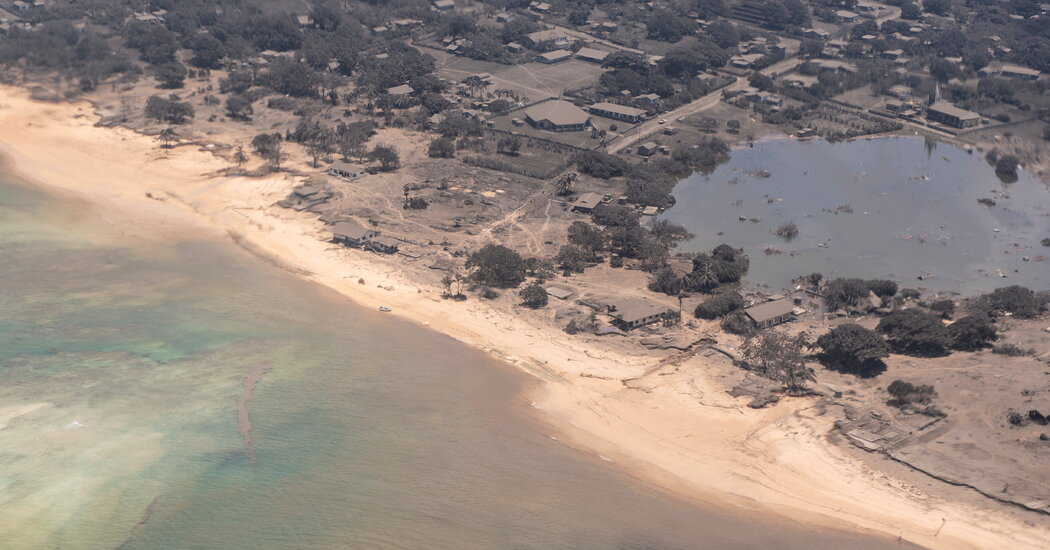 Many people in Tonga escaped the powerful waves triggered by an underwater volcanic eruption, in some cases by sprinting inland or climbing trees. But another problem has settled over the island nation in monochromatic blanket: a cloud of ash unleashed by the explosion.

The challenges are both immediate and long term. Firstly, in the four days since the eruption, the ash has prevented relief flights from landing at the country’s main airport, with the initial plane arriving on Thursday. Efforts by the Tongan Armed Forces to manually clear the main runway took longer than expected, in part because ash continued to fall.

The ash also contaminated some wells and rainwater tanks where people draw their drinking water. While the New Zealand military plane that was the first to land on Thursday was carrying supplies of water, experts said protecting the country’s water supply from ash-related hazards was likely an ongoing project . They also said the ash could harm agriculture and livestock, but the effects were difficult to predict.

Then there is the air. Scientists who study air pollution were watching closely to see what kinds of particles fell to the ground or remained suspended in the air. Compared to emissions from power plants, they said, the airborne health risks of a volcanic eruption may be more difficult to assess in real time because each volcano has a unique profile.

“You see visible smoke coming in, and of course we call it volcanic smog,” said Rajasekhar Balasubramanian, an air quality expert at the National University of Singapore.

“But the overall atmospheric and health impact of the volcanic eruption will depend on the magnitude of the plume, the behavior of the plume, the altitude at which the plume reaches, and the concentration of gas, particles and ash,” he added.

Thursday was a watershed moment for Tonga. The New Zealand Air Force cargo plane, loaded with relief supplies such as generators, communications equipment and shelter kits, landed in the late afternoon. An Australian military plane landed a few hours later.

The official death toll stood at three on Thursday evening. Yet with an undersea cable destroyed for weeks by the disaster – making satellite phones the only reliable way to communicate with the outside world – the extent of the devastation was still not entirely clear.

Photographs arriving Thursday showed boulders the size of car tires dotted with palm trees in a coastal area, its once vibrant greens dusted with grayish ash. In one, rubble was strewn around two seaside benches, at a place where families might have once stopped for lunch.

On Tongatapu, the main island, many locals reported that volcanic ash was still a problem.

“There’s only dust everywhere,” Kofeola Marian Kupu, 40, a reporter for a radio station in the capital, Nuku’alofa, said in a satellite phone interview on Thursday. “From the roof to the road to the offices, there is only gray dust.”

On the way to work, she said, only a handful of homes and businesses appeared to have been cleaned. People covered their faces with masks. Car windows were coated with a layer of gray.

Perhaps most importantly, she said, there was volcanic debris in the water supply.

“Normally in our houses we have tanks to collect rainwater for drinking, but everything is covered in ash,” she said. “What we really need is water.”

Falling ash and salt water from the tsunami that accompanied Saturday’s eruption polluted the drinking water sources of tens of thousands of people across Tonga, which has a population of around 100,000, the government said this week. International Federation of Red Cross and Red Crescent Societies.

Sainiana Rokovucago, the group’s director of programs for the Pacific, said in an interview on Thursday that the government was busy distributing fresh water that had been stored in reservoirs long before the eruption. She said she wasn’t sure the effort reached all affected households; the Tonga Islands cover 270,000 square miles.

But it was all clear, she said: Compared to the three recent volcanic eruptions in neighboring Vanuatu, where drinking water comes mainly from streams, the Tonga eruption posed a greater threat due to the use wells and rainwater tanks.

For most people in Tonga, “you’re so used to having water from your own reservoir,” she says. “But after this disaster, you can no longer. It is a mental transformation.

Two New Zealand navy ships were due to arrive on Friday with relief supplies and up to 250,000 liters of fresh water, as well as a desalination plant. New Zealand Defense Minister Peeni Henare said on Thursday a third navy ship would follow.

But Ms Rokovucago, who is based in Fiji, said cleaning up the country’s drinking water supply could be a long-term effort that requires desalination projects and the distribution of water purification tablets.

Carol Stewart, deputy director of the International Volcanic Health Hazard Network, said on Thursday that early reports that about one to two centimeters, or less than an inch, of ash had fallen on Tonga appeared to be accurate, based on the first photographs.

Scientists are now trying to obtain and study samples of the ashfall to better understand its potential health impacts, said Professor Stewart, who teaches at Massey University’s School of Health Sciences in Wellington, the neo-capital – Zealander. One thing they will test for is the presence of acids and salts which can pose risks to grazing livestock.

“It rained on Tongatapu so it’s useful for washing away the ashes,” she said in an email.

Because the ash is acidic, it can cause crop failure. This is a risk in a place like Tonga, where the economy is closely tied to agriculture, although the ash itself will eventually make the soil more fertile.

Jonathan Veitch, the United Nations disaster coordinator in Fiji, said on Thursday farmland in Tonga was not as awash in ash as previously assumed. Still, he said, the longer-term impact of the ashes on Tongan agriculture was unknown.

“We don’t know yet whether the ashes will kill the crops or not,” he added. “We have no idea.”

It was also unclear what risks the ashes might pose to those who inhaled them. Unlike wildfire smoke, it is coarser and tends to settle more quickly. Prof Stewart said particles larger than 0.1 millimeters are not respiratory hazards as they are too large to remain airborne.

Sean Casey, the World Health Organization’s Covid-19 incident manager for the Pacific, said in an interview on Thursday that there was still ash on the ground picked up and blown by the wind, but no news. ash was raining. He also said there had been no increase in hospital admissions linked to ash-related respiratory problems.

Yet scientists say the underwater volcano that erupted off Tonga was exceptionally powerful – and its potential impacts should not be underestimated. This is partly because small particles can be inhaled if an ash deposit is stirred up by wind, vehicles or other sources.

Some of the effects of ash clouds can be felt immediately, especially for people with underlying conditions like asthma or bronchitis, said air quality expert Professor Balasubramanian. He said residents should avoid the ashes by staying indoors, closing their windows, using air purifiers and wearing N95 masks.

But following such guidelines can be a challenge for residents of Tonga, a remote country where per capita income in 2019 was less than $5,000. Ms Rokovucago said aid workers have so far only been distributing surgical masks, not the most effective N95s.