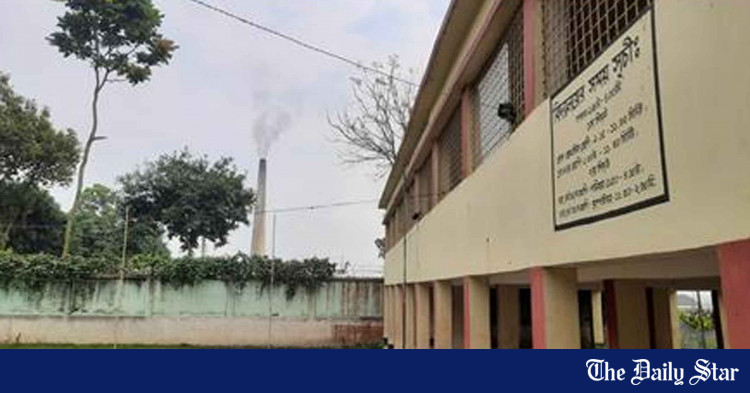 17 illegal brickyards near schools in Brahmanbaria

Even though it is illegal to set up brickyards within 1,000 meters of any educational institution under current law, 17 plots have been set up near several Brahmanbaria schools, exposing nearly 10 000 students in the region at risk of health complications. Picture: star

Even though it is illegal to set up brickyards within 1,000 meters of any educational institution under current law, 17 plots have been set up near several Brahmanbaria schools, exposing nearly 10 000 students in the region at risk of health complications. Picture: star

Several brick kilns, built near different educational institutions, operate in Brahmanbaria, defying the law and negating the objections of locals.

For all the latest news, follow the Daily Star’s Google News channel.

According to the Department of Environment (DoE) Brahmanbaria office, at least 17 brick kilns have been set up near educational institutions. As a result, more than 10,000 students are at health risk.

Under current law, it is prohibited to locate brickyards within 1,000 meters of any educational institution, swamp or farmland, hill, government road or residential area.

But local governments have taken no effective action against the kiln owners responsible for the violation, residents say.

According to the DoE, Mehdi Bricks is located near Khalapara Government Primary School in Suhilpur union of Brahmanbaria Sadar upazila. Paban Bricks is just 300 meters from Bakail Public Primary School in the same area. There is a government primary school within 600 meters of Arab bricks, next to Gokarnaghat in the municipal area of ​​Brahmanbaria. There is also another oven named Rony brickfield next to it. These two are located less than 500 meters from the perimeter of the municipal territory.

Messrs. Bharasa Bricks and Mia Bhai and Co (Azim Bricks) from Sindhura village in the Natai Dakkhin union of the upazila are located next to a public primary school and high school. Two brick kilns have been built along the river just 550 meters from Krishnanagar Abdul Jabbar High School in Nabinagar upazila.

Bhuiyan Bricks is 500 meters from Rampur Government Primary School in Bijoynagar upazila. Another kiln, Madina Bricks, is located the same distance from the school.

The New Mayer Doa Bricks in Rajabariakandi Village in Sarail Upazila is 600 meters from Baishamura Government Primary School, and next door is Subarna Bricks. There is also a primary school near New Samata Bricks in Shahjadapur village of the same upazila.

Titas Bricks is 600 meters from Mugra Government Primary School in Akhaura Upazila and 150 meters from Dhaka-Chattogram and Chattogram-Sylhet Railway.

During his visit to the area, this correspondent saw huge bricks being burned at Mehedi Bricks, set up near the Khalapara public primary school.

Parul Begum, headmaster of the school, said the brick kiln was causing them serious risks to their physical and mental health.

When contacted, Md Nurul Amin, Deputy Director of Brahmanbaria DoE, said there were 181 brick fields in the district, of which 99 were operating illegally. “Our department organizes mobile legal campaigns against all illegal brick kilns, including brick fields near educational institutions. »